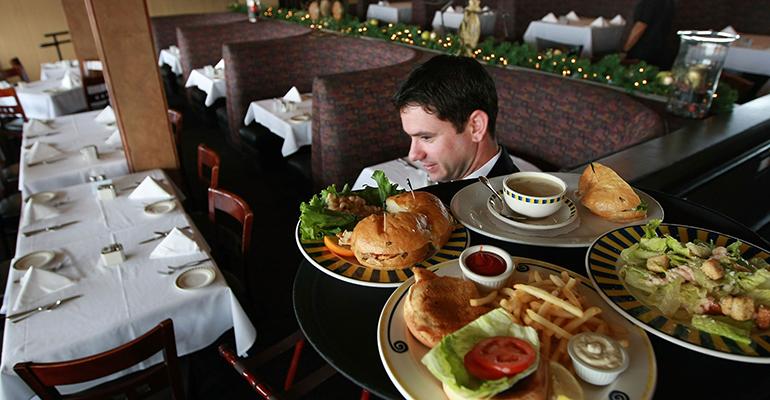 <p>No-tipping policies are might level the wage playing field, but many suspect they will hurt service.</p>
Trends>Consumer Trends

Tip bans have appeal for many restaurant operators, mainly those squeezed by new minimum wage mandates or struggling to attract and retain talented staffers—particularly back-of-the-house staffers—in the current labor environment. But restaurant customers haven’t bought in just yet. More than four out of five consumers told Horizon Media’s Finger on the Pulse survey they want restaurants to keep the at-will tipping policy that’s long been the industry standard.

An avalanche of media coverage last fall made it seem like no-tip policies were ready to sweep the nation. Shake Shack founder Danny Meyer made the move at his full-service restaurants to great acclaim. Meyer, a strategic thinker like no other, said the idea was to better balance compensation between front and back of the house workers.

“Hospitality Included”—i.e., no tipping—is indeed the policy at one of Meyer’s 13 Union Square Hospitality Group restaurants, The Modern. It was scheduled to go into effect at a second USHG restaurant, Maialino, in February, with the rest of the group’s restaurants following suit later in 2016. But 63-unit Shake Shack, the fast-casual operation Meyer founded that’s now a publicly owned company, does not have a no-tip policy.

Seafood chain Joe’s Crab Shack also drew wide coverage when it announced a no-tip format last fall. But it’s an experiment being tried at just 18 units. Customers at the company’s 120 other restaurants tip as usual.

A handful of independents have also gone zero gratuity, David Chang being the latest.  But for the moment, the no-tip movement seems dead in the water.

How come? If you sense that customers aren’t ready for it, you may be right. Eighty-one percent of the 3,000 U.S. consumers surveyed by Horizon Media say they prefer the status quo. Fifty-five percent worry building a service charge into the price of their meal would require them to pay the same amount whether the service they received was good or bad. Fifty-two percent want to be in control of how much they pay for service rather than having a flat fee imposed.

Young restaurant-goers are more open to tipping policy changes than older ones. But most don’t see it happening right away. Seventy percent of Millennial and Gen Z respondents tell Horizon they think tipping practices will be the same in five years as they are today. That’s more than Gen Xers (60 percent think policies won’t change) and Baby Boomers (53 percent).

“There are real economic and life stage realities at play for the younger crowd,” says Horizon’s Kirk Olson. “Many Millennials still face underemployment, and Gen Z-ers who’ve begun working are often working service jobs dependent on tips. Considering the rising popularity of Bernie Sanders’ ‘living wage’ stance among the same group, it makes perfect sense that they show greater interest in seeing tipping evolve,” he adds. “They’re also more global and connected. They know ‘service included’ is the way it’s done elsewhere and think it would be better for the U.S., even if they’re not convinced it will become a reality any time soon.”

Horizon also asked its survey respondents how much more they’d be willing to pay for tip-included meals. The survey found that 34 percent of respondents would accept up to a 15-percent increase in the cost of an item if the tip was built in. An additional 10 percent say an increase of 18-25 percent “would be fair in order to change tipping practices.”

So how did it work out for Meyer and USHG when the no-tip ban went into effect at The Modern, the group’s most expensive restaurant? Some unforeseen issues arose. Other operators eager to embrace the zero-gratuity movement may want to keep track on how future iterations of USHG’s “Hospitality Included” policy play out when it’s rolled out at other restaurants later this year.