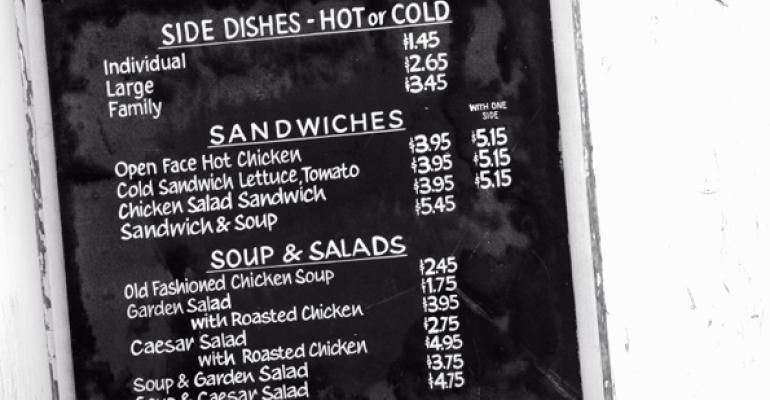 Menus: The higher price may be right

Wondering if you can pass along the costs of food price inflation without alienating patrons? Good news. A just-released study from Cornell University’s Food and Brand Lab found that when customers consume an identical meal, those who pay more for it rate their food higher than those who pay significantly less. The implication: If you want to bump up the price of your brunch buffet, go for it.

Cornell researchers David Just, Brian Wansink and Ozge Sigirci presented these findings during the 2014 Experimental Biology conference held in San Diego last week. Their work shows that even in a restaurant market where value-seeking customers are bombarded by daily deals, dollar menus, bargain combos and other cut-rate offers, the relationship between price and restaurant satisfaction remains complex. “We were fascinated to find that pricing has little impact on how much one eats, but a huge impact on how you interpret the experience,” Wansink says.

This small-scale study took place at an all-you-can-eat Italian buffet restaurant in upstate New York. Customers—139 in all—were charged either $4 or $8 for a luncheon meal. When they finished eating, diners were asked to rate the taste of their food and assess their overall satisfaction with the restaurant. They also rated their first, middle and last bites of food on a nine-point scale.

The authors conclude that operators in the buffet segment could charge more than they now do without impacting customer satisfaction.? “These results show that low buffet prices cause diners to find the food less tasty,” the Cornell researchers say. “Based on these findings, buffet owners should think twice before setting a low buffet cost. People will rate the food lower in quality but will eat just as much if a lower price is charged.”

This Cornell study doesn’t definitively tell operators in non-buffet segments where their particular sweet spot for pricing might be. But it does suggest that higher menu prices don’t produce the type of negative impact you’d expect. That’s a key finding for operators who can no longer absorb the rising costs of meal ingredients and are looking for the least-painful way to pass along these cost increases to their customers.