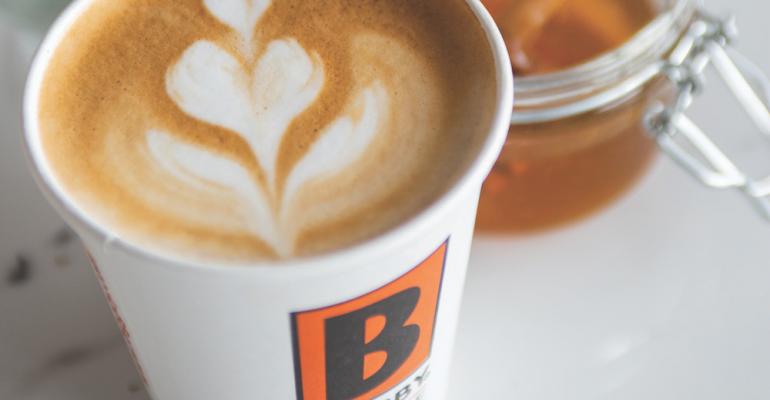 Coffee, an indispensable part of many consumers’ mornings, is solidifying its place in their afternoon routines as well.

There were 3 billion servings of coffee ordered at quick-service coffee shops in the year ended February 2019, up 4% from a year ago, according to research from The NPD Group.

Enabling that growth, in large part, is coffee consumed as an afternoon snack.

“As consumer concerns around sugar and sweet foods arises, specialty coffee has become one of the preferred indulgent snacks, treats or rewards at certain time of the day,” explained Portalatin. “A lot of people are making room for specialty coffee.”

Coffee shops are expanding on par with consumer demand, NPD found. The number of chain coffee shop units grew 4% from last year to a total of 19,617 units, while independent coffee shops remained stable at 17,078 units, according to NPD’s Fall 2018 ReCount restaurant census.

“Coffee places are attractive at different meal occasions,” Portalatin said. “[That’s] a big part of the success of coffee chains in the restaurant space.”

Though the coffee market is dominated by several behemoths like Starbucks and Dunkin’, smaller brands are also seeing success in the space by differentiating their products and experiences. Among them are Biggby Coffee, a 233-unit franchise based in East Lansing, Mich., and Partners Coffee, a hyper-local gourmet coffee roaster and purveyor with five locations in Brooklyn, N.Y.

For Biggby Coffee, success at the afternoon snack occasion is all about innovation and diversification.

“We can’t just hang our hats on the 6 a.m. to 10 a.m. crowd,” said Jamie Stepanian-Bennett, vice president of Biggby Coffee.

Biggby has had success offering a wide array of whimsical coffee creations, including a line of Favorite Lattes — including the Butter Bear Latte, with caramel, butterscotch, milk and optional whipped cream topping — but is it now focusing on making more intentional choices to drive coffee visits in the afternoons. This spring, Biggby launched a Honey Lavender Latte in partnership with the National Honey Board. With each beverage, guests receive a co-branded seed packet to support bee pollination.

The chain is also working to adapt its offerings to changing consumers, adding on-trend alternative milks such as oat milk to appeal to a younger generation craving healthier options, and new menu items, such as the new Turkey Havarti Bagel.

To meet the between-meal needs of busy families, Biggby is considering pairing an adult beverage with its recently launched kids grab-and-go snack packs.

“I don’t think we’ll ever go away from specialty coffee with whipped cream, but we need to continue to diversity our offerings,” Stepanian-Bennett said.

Though Partners Coffee’s five cafes are light-filled, elegantly appointed and built with ample seating, as recent as a few years ago they were a little too quiet in the late afternoon.

“We saw people going into other [types] of stores but not ours,” said Allie Caran, Partners’ director of education.

To attract and engage the 3 o’ clock crowd, Partners began introducing innovative, in-store-only specialty coffee promos, and baking — and giving away — cookies each afternoon from 3 pm to 5 pm.

“We wanted to give people a reason to come to the cafes,” said Caran. “It’s activated our afternoon crowd in all stores.”

Among Partners specialty coffee offerings is the Cold Brew Crushie, made with sweetened condensed milk, cold brew coffee and crushed ice blended in a giant slushie machine.  The next coffee special, an Espresso Mint Basil Julep made with a double shot of espresso, mint, basil, house-made simple syrup over ice, will be available on May 4 in time for the Kentucky Derby.

Flavor of the week: The Michelada, where beer and tomato juice come together
May 24, 2021