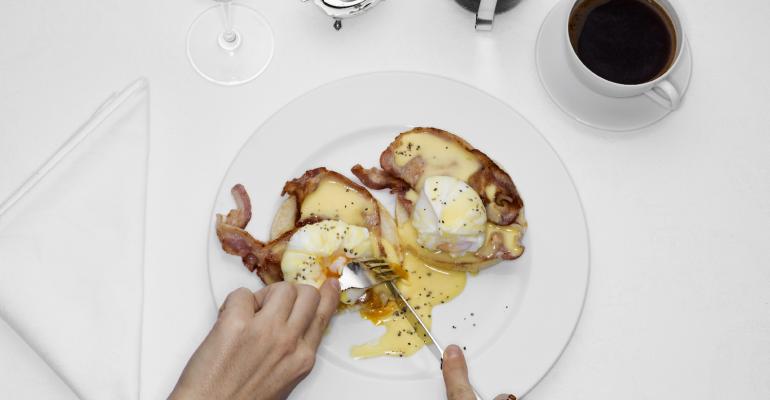 Jonathan Knowles / Stone / Getty Images
The morning snack daypart improved visits in the three-month period by 6% compared to a 7% decline last year and down 1% for the same period in 2019, NPD said.
Trends>Consumer Trends

Breakfast and lunch restaurant visits showed signs of improving in the September-November period after suffering from restrictions on schools, workplaces and other activities during the COVID pandemic, according to new U.S. data from the NPD Group.

NPD said Wednesday that In the three months ending November, online and physical visits to restaurants for breakfast increased by 11% compared to a 10% decline in the same period in the prior year.

“From a pre-pandemic view, breakfast traffic is now at the same level as the September through November period in 2019,” NPD noted.

The morning snack daypart improved visits in the three-month period by 6% compared to a 7% decline last year and down 1% for the same period in 2019, NPD said.

Lunch improved by 4% in the reported period compared to a year ago when visits were down by 11%. However, NPD's continual tracking of the U.S. foodservice industry found lunch was still 7% below pre-pandemic levels.

"The increased mobility this fall contributed to year-over-year gains at key restaurant dayparts, although visits are not fully back to pre-pandemic levels," said David Portalatin, NPD’s food industry adviser and author of “Eating Patterns in America,” in a statement.

"We're in a steady-state for the next several months, perhaps with a bump up or down here and there, but we expect to lag pre-pandemic traffic levels through 2022 slightly,” Portalatin said.

On-premises visits were also recovering, NPD said, but the data was collected before the COVID omicron variant’s impact in December.

Visits for dine-in at breakfast increased by 51% in September through November this year compared to the same period in 2020, when on-premises traffic was down 55%, the data company said.

Lunch also improved on-premises traffic by 44% this September through November compared to the 60% decline in the same period in 2020.

“Despite these substantial gains in recent months, traffic levels for all dayparts at on-premises remain well-below pre-pandemic levels,” NPD said.