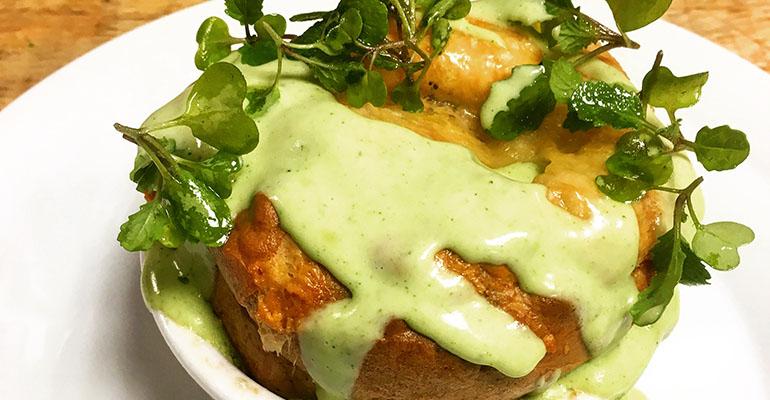 The dishes of the American South are popular all over the United States, but Southern cuisine continues to evolve as chefs make use of newer cultural influences that have arrived in the region.

“There’s a lot of really great Southern chefs right now that are doing all sorts of different stuff,” said Cullen Campbell, chef and co-owner of Okra Cookhouse & Cocktails, in Phoenix.

The American South is a melting pot, settled long ago by people from different parts of Europe who learned both from Native Americans and West African slaves. They were followed by immigrants from Asia and Latin America, who brought their own cuisines to the region.

The South contains many cuisines, including the rich, seafood-focused cuisine of the Lowcountry, in Georgia and South Carolina, the spicy Cajun cuisine of the Louisiana bayous, and the more refined Creole cuisine of New Orleans, not to mention multiple barbecue traditions.

Campbell, who grew up in Memphis, Tenn., but spent more than a decade cooking Italian food, said he opened Okra “so I’d have someplace for me to eat.”

In the course of cooking Italian food, Campbell realized similarities between it and the Southern food he grew up on, such as slow-cooked meats and lots of fried food.

“So it made sense to kind of throw it together,” he said.

That’s what he’s doing at Okra, where he recently offered his version of arancini, or Italian fried rice balls. Campbell replaced the rice with macaroni and cheese, a Southern staple.

“People loved it,” he said.

Then, to change things up, he replaced them with balls of barbecue lamb neck with roasted Brussels sprouts and balsamic vinegar.

The lamb necks are coated with a barbecue rub, smoked for four hours, and tossed with roasted Brussels sprouts and vinegar. Campbell tops them with toasted breadcrumbs and serves them over yogurt, “to give it a little zip,” as a Mediterranean-inspired substitute for the traditional coleslaw.

Campbell also serves his own variation of shrimp and grits, a classic Lowcountry dish. He uses local polenta, a more finely ground version of grits, and Calabrian ’nduja sausage, instead of a Southern sausage.

And to add Italian flavor to his fried chicken, Campbell seasons olive oil with an Umbrian combination of roasted garlic, oregano and paprika, and drizzles it on top.

In Houston, chef Bobby Matos’ menu at State of Grace celebrates the many cultures that make up the Texas city.

Dishes include crawfish Benedict, for which Matos steams the seasonal shellfish and serves them over cornbread, instead of an English muffin. He uses a Creole blend of Worcestershire sauce and horseradish that he folds into a French hollandaise sauce.

Matos also makes Cajun/Creole dirty rice, but instead of using a Southern sausage, he uses Mexican techniques and flavors to make a crawfish chorizo, and tops the dish with sea scallops for refinement. And to recognize Houston’s Southeast Asian and East Texas cultures, Matos offers a side dish of smoked redfish fried rice.

Matos makes the rice using ingredients such as Thai basil, cilantro, Serrano chiles, crispy shallots and peanuts, along with curry oil. He adds smoked redfish, “which is a pretty classic thing down here, especially in Texas,” he said.

“There’s so much different influence in Southern cuisine already,” Woodward said. “We’re taking something that’s fairly traditional and adding a twist to it, or taking traditional ingredients and doing different techniques.”

For example, instead of making a typical broccoli and cheese casserole, Woodward elevates it into a soufflé.

He also puts the flavor elements of a New Orleans muffaletta sandwich into baked oysters. For that dish, he uses the sandwich’s olive-based salad and combines it with mortadella, Genoa salami and provolone cheese. He puts the mixture on oysters, bakes them, and finishes them with breadcrumbs and a lemon wedge.

“It’s combining two really cool things that we get here in the South,” Woodward said.

Tony Seichrist is taking a different approach at The Wyld, in Savannah, Ga.

The chef and co-owner of the two-year-old dockside restaurant said he’s trying to bring back a “geotag through taste,” using local ingredients, but with a global palate.

“We’re really trying to build back up that sensory memory that comes from eating in the Lowcountry,” Seichrist said. “But it doesn’t mean we’re not going to open up our pantry.”

Georgia’s climate can support the cultivation of spices like ginger and turmeric, and Seichrist said farmers in his area are doing just that, “so in a few years hopefully we’ll have a more unique farmers market than, say, Atlanta.”

In the meantime, he’s taking a Korean approach to the ingredients he has on hand. For a whole fish dish that was recently menued, he’s adding a slaw made from local green onions, using the green part that Southerners usually shun. He slices them lengthwise and dresses them with sesame oil — sesame, or bene, seeds, are an important ingredient in both Lowcountry and Korean cuisines. He tosses the green onions with peeled segments of orange and grapefruit.

He also draws inspiration from other coastal areas, like Maine.

Inspired by Maine’s lobster rolls and coastal Georgia’s Royal Red shrimp, Seichrist tosses the steamed shellfish in a little Duke’s mayonnaise, which has a cult following in the South, along with Meyer lemon juice and chives. He serves the shrimp in what he calls “a really fancy hot dog bun,” as he continues his search for a local source for the split-top buns used in Maine.

“There’s really no rules that we look to,” Seichrist said. “We’re just making a great dish that works.”