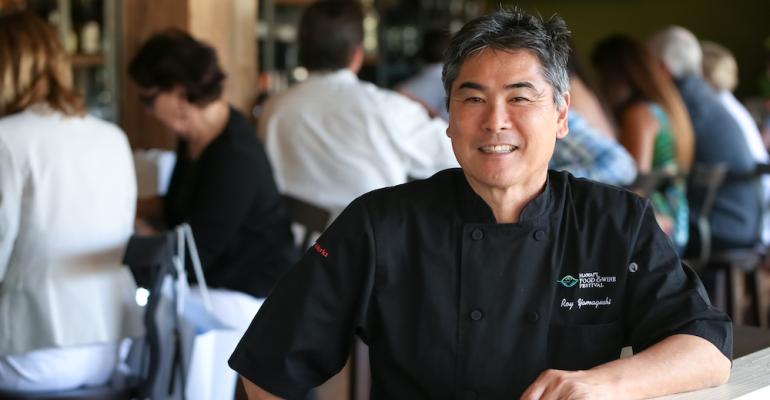 Roy Yamaguchi supports Hawaiian tradition with ‘Kalo to the World’

The initiative hopes to raise awareness of the crop

Anyone born and raised in Hawaii knows the importance of kalo and what it means to the indigenous people of the islands.

Chef Roy Yamaguchi, who has built his career on the islands, says he respects the plant, known as taro to the wider world, and its rich ties to his home, and that’s why he’s trying to spread awareness of its importance.

“I’m not Hawaiian, but I appreciate a lot of the things they've done because it's their land and I like the fact that it’s spiritual, it’s nutritional, and there’s a lot of balance to what they do,” he said of Hawaiian taro farmers.

Recently taro farmers on the Big Island have made a point to restore that balance by pausing visitation to Waipio Valley, home to one of the state’s largest productions of taro, to rehabilitate the space and invest in long-term planning for the area. The move is an opportunity for the state to pause and reflect on taro production, its uses, history, and potential in the area.

Kalo is a staple plant in Hawaii and rooted in the culture’s creation story. For centuries it has been grown on the islands and has survived its many transitions and upheavals. Researchers believe that ancient Hawaiian farmers may have been using sophisticated engineering techniques to grow the plant as far back as 800 years ago, and at one point thousands of acres were farmed across the islands. However, today kalo covers just a few hundred acres and doesn’t produce enough to meet demand, so taro is now imported to the state.

“At one time there were hundreds of taro growers, and now that’s dwindling down and there's very little at this point,” Yamaguchi said.

That’s one reason why he is working with local taro farmers and investing in a new mission called Kalo to the World.

“I try to do whatever I can to revive that part of the industry, and to show that the product is versatile and that there’s a lot of things you can do with it,” he said.

Kalo to the World is a new program led by Yamaguchi and his wife, Denise Hayashi Yamaguchi, in partnership with the Hawaii Executive Collaborative and Kamehameha Schools, as well as the annual Hawaii Food and Wine Festival. The effort is aimed at elevating kalo as a unique and important food source. The goal of the initiative is to highlight the plant’s cultural significance to the native Hawaiian people, while sharing its special nutritional and medicinal properties with the world. In joining forces, the three community leaders aim to support local kalo farmers and increase production of Hawaiian-grown kalo, making it accessible for all of Hawaii’s people.