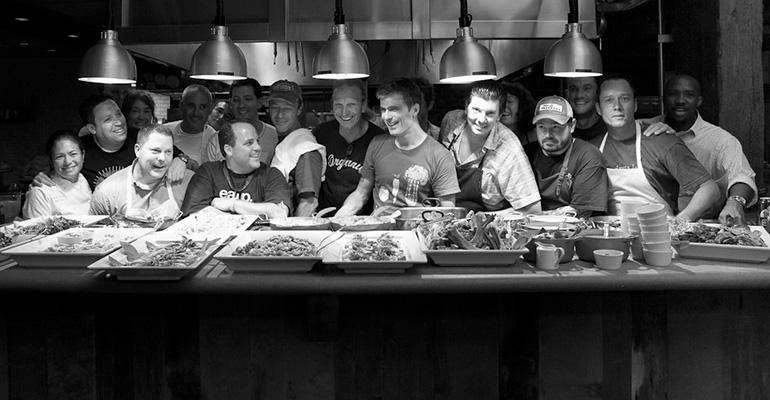 Operators take a stand for causes like food, fair labor and the environment

There was a time when it was common to hear restaurant operators say they felt politics should be left at the door.

Today, however, it seems the opposite is true. Across the country, chefs and restaurant operators are increasingly #StandingUpForSomething — whether it’s food, the environment or fair labor practices.

Many see the role of leading a restaurant as a platform. Some predict that will be particularly true this year, as the nation heads into mid-term elections.

Adding to the drumbeat are politically active chefs like José Andrés, who has very publicly knocked heads with President Trump in the courthouse and on Twitter, and who at times seems superhuman in his ability to be a force for good while running a growing restaurant group. Andrés, chef and CEO of Washington, D.C.-based ThinkFoodGroup, fed millions in Puerto Rico after Hurricane Maria and has been a vocal advocate for immigrant rights and policies that impact world hunger. This year, the James Beard Foundation named him Humanitarian of the Year.

Some say they feel torn. They may be inspired to take up a cause, but there’s always a fear that some customers will respond with the inevitable, “Just shut up and cook.”

Still, chefs and restaurant operators are increasingly asked to lobby policymakers, host fundraisers, and use their restaurants as soapboxes to educate and seek change. They are job creators and plugged into their communities. And they bring certain people skills to the table that can be valuable for change agents.

Buckling down at boot camp

Advocacy is becoming a skill many in the industry feel they need.

That’s in part why the James Beard Foundation has offered a Chefs Boot Camp for Policy and Change, for those in the industry to learn how to become better advocates. The program launched in 2012, and in March the organization hosted its 14th class. Among the attendees were Maneet Chauhan from Nashville, Tenn.; Sara Kramer from Los Angeles; and Kevin Nashan from St. Louis.

There is a waiting list of more than 800 people to get into one of the classes, which are limited to about 16 people per session. About 200 have graduated from the program, Miller said.

The boot camps are built around the theory that “chefs are tastemakers, brilliant marketers, but also business leaders and employers, so they really represent the type of voices that policy makers want to hear from,” Miller said.

The topics vary by session — most recently, the class focused on the federal Farm Bill — but it’s not about the issue so much as learning how to be an activist, Miller said.

Restaurant people are not homogeneous, she noted, so they may not always come down on one side of a debate.

Recently, there has been demand among participants to look at broader subjects, like wage and workforce issues, but the topics mostly relate to food.

“What we know is that chefs are some of the most trusted spokespeople related to food issues,” Miller said. “We know consumers want culinary professionals involved in the debate because they respect them and look up to them.”

While most customers don’t walk into a restaurant to get a plate full of politics, Miller said, it’s more about how to approach that type of conversation with guests.

“We highly, highly recommend that you don’t delve into political discussion without training, because it’s rough out there,” she said.

Chef and restaurateur Renee Erickson, owner of the Seattle-based multiconcept group Sea Creatures, said she attended a boot camp after coming to the realization that she could be a force for change.

“My business and my public persona had grown,” said Erickson, whose restaurants include The Walrus and the Carpenter, The Whale Wins, and Bar Melusine. “It was a combination of people asking you what you think and realizing you have some leverage.”

The boot camp helped her hone in on topics where she could make the most impact, she said.

“There are so many things wrong with our system, you wonder, ‘How can I do anything?’” she said. “But they tell you that, at some point, something will present itself to you that will matter the most.”

Erickson has since become vocal opponent of net-pen fish farming in Washington State, and she has rallied to stop oyster farmers from using pesticides. With the Environmental Defense Fund, she has lobbied federal lawmakers on fishery conservation.

“I was shocked that people wanted to hear what I had to say about that,” she said.

A proponent of the no-tipping model, Erickson has also been a vocal supporter of raising the minimum wage. On President Trump’s inauguration day, Bar Melusine hosted a fundraiser for the Anti-Defamation League, and she urged chefs across the country to join her.

Even in liberal Seattle, the event prompted some calls.

“We had some calls saying, ‘We’re not going to come to your restaurant,’ and, ‘How dare you.’ But if I had Googled those people, I bet they wouldn’t have come to our restaurants anyway,” she said. “I think, by and large, people are grateful for people speaking out about it.”

A number of organizations tap the power of those in the restaurant industry, including Chefs Collaborative, which supports environmentally sustainable farming and fishing; No Kid Hungry, which battles food insecurity; and Seafood Watch, which aims to protect the oceans.

Another is Washington, D.C.-based Food Policy Action, which chef and TV celebrity Tom Colicchio co-founded in 2012 to hold policymakers more accountable on issues related to food. The group publishes a scorecard that shows how lawmakers voted on various bills. This year, a report will look back at six years of voting.

But in January, Colicchio quit the group’s board, saying he was frustrated with the core work of the group, according to the New York Times.

“I’m looking for people who have a message around food and changing the food system writ large. We have to look at this through more of an economic lens and the disparity that forces more and more people to look toward processed foods,” he said.

Ken Cook, the group’s co-founder and board chairman, said Colicchio brought a great, high-profile energy that was a boost at the beginning. The group also works with other prominent chefs, including Nora Pouillon, Andrew Zimmern and, unsurprisingly, José Andrés.

Additionally, the group taps chefs across the country for “fly-in” advocacy days to lobby and educate.

In May, a group of chefs will participate in a fly-in event in Washington, D.C., on the Farm Bill, scheduled for renewal this year, which includes the Supplemental Nutrition Assistance Program known as SNAP, in addition to programs that impact organic farming specifically and the U.S. agriculture system overall.

The important piece of legislation faces significant revision in the House and a more bi-partisan draft in the Senate. It will be Food Policy Action’s last fly-in event on the Farm Bill this year, before it turns attention to the mid-term elections.

Among the chefs scheduled to participate are Tiffany Derry of Dallas, Ben Hall of Russell Street Deli in Detroit and “Top Chef” winner Nicholas Elmi of Laurel in Philadelphia.

“When Tom got involved, it really opened our eyes to this whole community that speaks with real authority,” Cook said. “For restaurants, the first impulse is to do fundraisers and work for local organizations that literally feed people, like food banks and what have you. But people are beginning to realize we can’t solve these problems through charity, that we need policy to do it.”

Still, for many, there is a fear that taking a stand could hurt business. “But it’s the refuge of the coward to say you don’t want to speak out at the risk of upsetting or, you know, polarizing anyone that’s coming in to eat,” said chef John Currence (left), whose City Grocery Restaurant Group includes the namesake City Grocery, Bouré and the growing Big Bad Breakfast chain.

Currence, based in Oxford, Miss., is fiercely unafraid of expressing his political views on social media.

In tweets, he calls President Trump names like “Cheeto,” and offers running commentary on events of the day, with strong opinions on issues like voter apathy, gun control and education. Although he’s a registered Republican, he feels “the party system is so cocked up” that neither party will be able to solve the issues on the table.

But he tries not to politicize his restaurants, he said.

“There have been a couple of times when the state legislature passed something I felt was egregious and I immediately wanted to generate a note to put on the door, and my wife — who’s a thousand times smarter than I am — was very quick to go, ‘Okay, dumbass. Don’t make them make a choice before they walk through the door. They’re not coming for a lecture, so leave the signage out of it.’ Which she was absolutely right about.”

For years, Currence has hosted fundraisers and events in support of LGBT issues. And even in conservative Mississippi, Currence said he hasn’t heard much pushback, except after an incident while on a book tour last year when he signed books with “Trump is a turd,” which he admitted was childish.

“But I was mad that the American public was considering this moral dead-zone of a human being as a candidate for the most distinguished office in the world,” he said.

Currence said he wasn’t sure how he’ll get involved in the mid-term elections or the governor’s race in Mississippi, which also heats up this year.

Like most restaurant operators, he’s focused on surviving day to day, with so many costs going up, he said. But he does feel a responsibility to speak up for those who don’t feel they have a voice and to fight to protect the jobs he’s worked so hard to create.

“We represent as grassroots an effort as there is in this country,” he said. “I’m in touch with those people every day. I know their kids and their families. So, yeah, I’m going to fight. We’re out there fighting for our people.”

4 tips to become an advocate

1. Learn about the issue. “Don’t just go out there and start talking about politics or policy,” Miller said. “Get to know the issue you really care about.”
2. Find partners and a well-respected organization that can work with you.
3. Find your personal passion. It will be more powerful if you really care about the issue.
4. Make the decision whether this is something you’re doing as a citizen or as part of the identity of your restaurant brand. If necessary, draw a line between the two.