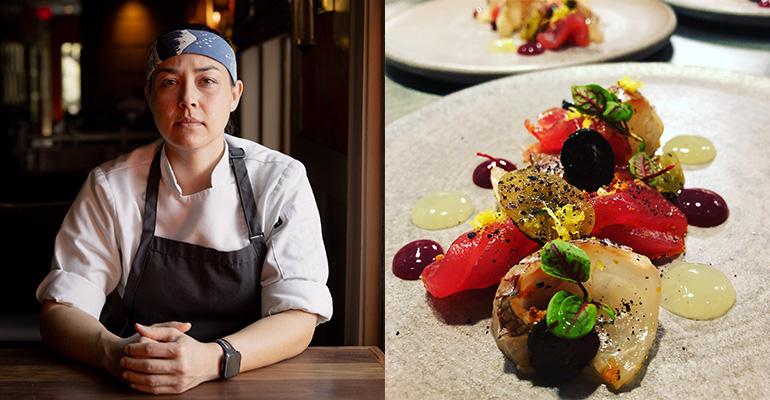 Shannon Kennedy is the head sushi chef at Uchiko leading a sushi a team that’s comprised equally of men and women.
People>Chefs

How one woman is leading an innovative sushi team in Austin

Shannon Kennedy, head sushi chef at Uchi, explains how she’s risen in the ranks in a mostly male niche

Shannon Kennedy is the head sushi chef at Uchi leading a sushi a team that’s comprised equally of men and women — an oddity for kitchens in general, but especially in the sushi world.

Uchi is part of Hai Hospitality, which is also parent of the concepts Uchiko, Uchibā,and LORO Asian Smokehouse & Bar in Austin.

Here’s how Kennedy got started and how, at a young age, she has risen the ranks to become head chef. She’ll also share leadership lessons she’s picked up along the way.

RH: How did you begin your culinary career?

I was born and raised in Hawaii, so I already had kind of a background in sushi. I did not necessarily seek it out. I started as a dishwasher in Florida. And I was asked if I wanted to do sushi, and having a background, knowing what it is and how it all comes to be. I thought it would be a great opportunity and I took it.

RH: And was that before or after you went to culinary school?

I actually started sushi first then I went to Le Cordon Bleu. I didn't seek out the restaurant industry. When I first started, my previous jobs were grocery stores and [other traditional high school jobs] — I wasn't thinking about a culinary industry career. At first, I was looking to see what else I could do, while I was washing dishes, when they approached me to actually start doing sushi. I kind of went with that and I dropped all the other ideas that I was going with in life. So, I ended up staying with the restaurant industry since I was 19.

RH: So, it wasn’t your lifelong passion, but it’s become that?

I mean, it eventually became obvious [that cooking was my passion]. I mean, the only reason I went to Le Cordon Bleu, and this was about nine years ago or so, was to round out my culinary experience. Sushi wasn't something that I sought after, I just started as a dishwasher and the opportunity presented itself and I definitely took it.

RH: Is there anything you feel limited by in your culinary niche?

Well, one of the great things that, personally, I think is great about our company, is that we're able to kind of collaborate with each other. Both sushi and the kitchen side of things, and we're actually able to come up with dishes. So anytime that I've made a dish or anything, I've definitely collaborated with some of our sous chefs in the kitchen or the head chef. And together, I was able to try different things that I'm interested in. Outside of sushi and really bring it into a sushi dish.

Some of the things that I was interested in from back in culinary school, some of the pastry aspects, gels and purees, those kinds of things you don't typically see in Japanese cooking. Those are definitely things that I became interested in throughout the years and working with the back of the house, it really showed me how to integrate different techniques. So, I was able to learn how to make fruit purees and vegetable purees and really broaden my horizons. I'm really grateful for that, and it's something that I'm, you know, as a head chef now, really asking people to get out there and start collaborating and get the creative juices flowing.

RH: I feel like you probably get this question a lot but, what’s it like to be a young, female, head sushi chef?

RH: You’re already a head chef and still so young. What’s ahead for you?

I still have a lot to learn in my position, and I still feel like I have a lot of growth. As far as the next step. … I feel the learning, the amount of learning, I still have to do is something that I'd like to stick with and see this out.

RH: What are some of the things you’ve already learned?

One of one of the things that I've learned the most in the past few years is just people. And that's something you don't always get a chance to learn when you're a line level employee. Once you start getting into the upper management part of things you start to learn that people are something that you really should continue to work on and grow towards

RH: It sounds like your kitchen is more of a community than a workplace.

I think it has a lot to do with their personalities and the fact that they really do mesh, and they get along. But it's also, you know their dynamic is specific to them. And a lot of it doesn't necessarily have to do with male or female, it's just kind of who they are.