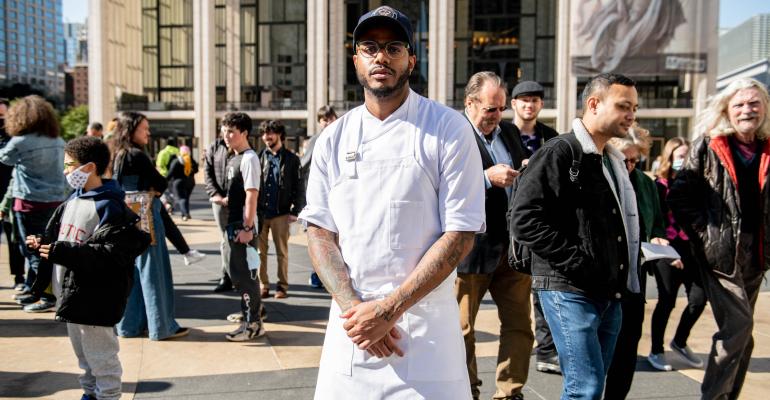 The Bronx-born, James Beard award-winning chef is opening the restaurant at the famed Lincoln Center today

“Opening Tatiana at Lincoln Center is a longtime dream come true for me,” said Onwuachi in a release. “Having grown up in the Bronx, I know this area has long represented arts and culture. We’re drawing on the city’s vibrant 1980s music and art scenes and paying homage to the often-overlooked places which shaped the city’s fabric and creative culture.”

The restaurant, located in the David Geffen Hall, is named for Onwuachi’s sister and features dishes that are a trip down memory lane for the chef. The menu includes dishes that are a take on his childhood favorites like Truffled Chopped Cheese Buns with dry aged ribeye, smoked mozzarella and taleggio, and something from his Nigerian heritage: Egusi Soup Dumplings stuffed with black sea bass and served with Nigerian red stew and pickled pearl onions.

The design of the restaurant is inspired by Onwuachi’s childhood growing up in the South Bronx in the 1990s, as well as the razing of the famous Black and Brown neighborhood San Juan Hill in the 1950s to pave the way for Lincoln Center. The restaurant represents a “spirit of outspoken self-expression and hustler’s grit,” according to a release.

Inspired by the hip hop and art scene of the ‘90s, the interior harkens back to Onwuachi’s days of playing around fire hydrants on hot summer days.

“The design of Tatiana dovetails with Lincoln Center’s own forward-looking mission to diversify and extend its patronage for its world-renowned program of performing arts,” said Preeti Sriratana, partner/managing director at architecture firm Modellus Novus, in a release. “We created a welcoming and celebratory atmosphere for the many, a space that takes traditionally industrial or ‘ugly’ materials and delights in revealing their beauty, an environment where people from every corner of our city can feel at home.”

Everything in the restaurant has been designed with an impeccable eye, down to the uniforms.

The aprons resemble a chic oversized belt with a side pocket and a hidden pen pocket that fuses utility with a structured architectural design. In addition, the refreshed version of chef jackets have a double-breasted crossover closure with hidden snaps, Mandarin collar designed to form a deep V, and elbow length sleeves with a functional and eloquent notch that allows for the arm to bend and flex.