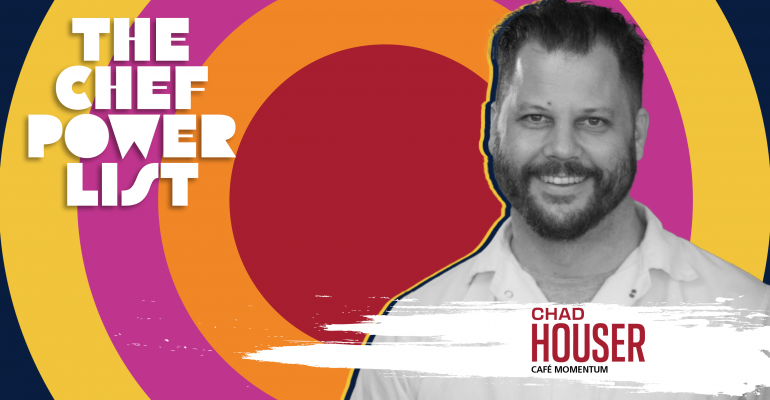 The Café Momentum model is spreading across the country from Dallas, offering job training and support to 15-19-year-olds

Three years ago, Cameron Carver was 15 and coming out of the juvenile justice program in Nashville, Tenn., after being incarcerated. He needed to help provide for his family, he said. “But I didn’t know how to do that the right way.”

A probation officer told him about a pop-up coming to town, hosted by Café Momentum in Dallas, a restaurant and nonprofit founded by chef Chad Houser that works with at-risk youths and offers job training and support. Carver decided to go to the event because he needed the money. And — after just three days, with coaching — he and others prepared an amazing multi-course meal at a high-end restaurant.

Carver was hooked. “Seeing the food we made go out to the tables, and seeing people’s faces, taking pictures of the food and knowing I did that — it was a feeling I hadn’t felt before,” he said.

Now 18, Carver works full time in the kitchen at the Nashville restaurant Geist. Carver is paying his bills, and he’s on a career path that he’s excited about. He also serves as an ambassador for Café Momentum, which has big growth plans this year and is hosting pop-up events in more cities to spread the message.

Houser, who founded the Dallas location of Café Momentum seven years ago, has created a model that proves itself over and over: If you give young people a path to financial stability in a workplace without judgment, and a little support, they can break the cycle of incarceration.

The juvenile justice system doesn’t work for rehabilitation, said Houser. “Young people go in, but they never come out.

“We’ve created a system that does the opposite. Instead of telling them they’re bad, they can’t and they shouldn’t, we tell them they can and should,” he added. “We’ve created an ecosystem of support.”

In 2020, Houser launched the Momentum Advisory Collective, supported by the Stand Together Foundation and the Players Coalition, a nonprofit that works with professional athletes on social justice issues.

The collective is taking the Café Momentum model national, opening new outlets for the concept in Nashville and Pittsburgh this year and hosting pop-up events in other cities — like a recent star-studded dinner at Rossoblu in Los Angeles on Super Bowl weekend.

Café Momentum targets kids between the ages of 15 and 19, an age that many restaurant employers might see as too young. But Houser is asking restaurant operators across the industry to give these kids a try and provide meaningful employment after the youths complete the Café Momentum program.

“I have been in the business for 25 years and I have seen so many people that have been metaphorically embraced by their restaurant family and brought out of financial crisis, depression or drug addition,” said Houser. “There’s a high level of camaraderie. Our industry knows how to tackle crisis.”

And, at a time when the industry is facing a labor crisis, Café Momentum can help employers find highly motivated workers like Carver — who now dreams of owning a restaurant chain someday like Café Momentum, “one that not only provides an opportunity that a lot of people need, but also a job that you’re excited to show up to,” said Carver. “I wouldn’t want to be anywhere else [but the restaurant industry]. I want to provide that stability for others.”