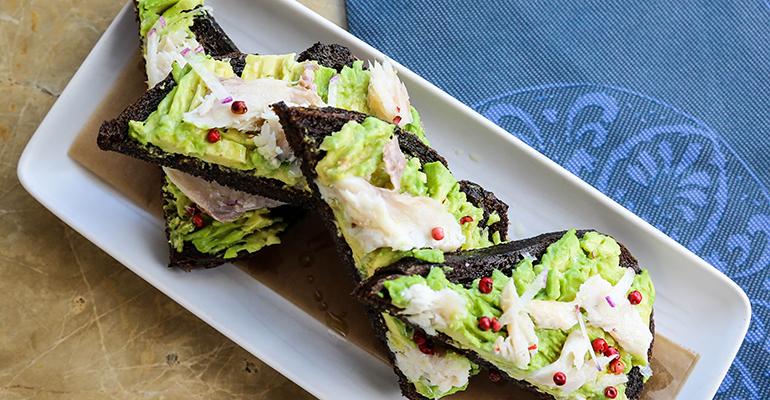 Alon Shaya has helped bring Israeli cuisine to the forefront in America, but he was an award-winning chef even before he started exploring his own culinary heritage.

Born in Israel and raised in Philadelphia, Shaya spent his early years avoiding his roots, “pushing that history that I had away, because I was trying to fit in,” he told attendees at the Food & Wine Magazine Classic in Aspen, Colo.

After being taken under the wing of his home economics teacher, he began cooking and was drawn to Italian food, a cuisine that reminded him of the Bulgarian-Israeli food he grew up on, but in a way that didn’t seem as “lame,” he said.

Shaya worked his way through various Italian restaurants and ended up in New Orleans, where he had a goal of creating Italian food that would change the world.

“I was kind of in this really immature, egotistical way of thinking about that,” he said.

Hurricane Katrina gave him a new perspective. Immediately after the storm that devastated New Orleans, he was cooking red beans and rice on the street for people who were rescuing others or being rescued.

Staple ingredients of the dish — peppers, sausage and onions — weren’t available, but, “Seeing the look in people’s eyes when I was handing them a crappy plate of red beans and rice … it brought them so much joy,” Shaya said. That reminded him of why he started cooking: To bring smiles to people’s faces.

“I threw my arugula coulis recipe out the window,” Shaya said, and returned to Italy to apprentice with grandmothers and chefs. He saw that they were all working for a greater purpose than themselves: making fresh pasta, for example, not just to please their customers, but to teach their children.

He returned to New Orleans and opened Domenica with chef and restaurateur John Besh, with the intention of cooking food not for himself, but to make others happy.

The result was wild acclaim, earning him a James Beard Foundation Award for Best Chef in the South.

With renewed humility for his job and confidence in his ability to do it, Shaya had a revelation when he visited Israel a couple of years after opening Domenica. Walking through the markets, “I almost heard my grandmother’s voice saying, ‘This is who you are; this is what I taught you, and you’ve pushed it away.’”

So he started sneaking Israeli food onto the menu at Domenica. He made hummus and called it ceci purée — “ceci” is Italian for chickpeas. He served flatbread with za’atar, labneh and roasted cauliflower and called it pizza.

Customers loved it, but Shaya realized that Domenica would lose its identity as an Italian restaurant if he continued.

So he opened Shaya in 2015 to tell his full story as a chef and a person, rather than serving the Italian food he turned to because of his own insecurities. Last year, Shaya won the James Beard Foundation Award for Best New Restaurant.

“With the team that we had, a lot of stars aligned,” Shaya said. “It could only have happened at that time. Had I tried to do that two years after Katrina, or a year before Katrina, it wouldn’t have worked. I didn’t have the time in the city to build the trust of the community, to be involved in the community, to meet and get to work with really smart, talented individuals.”

The restaurant calls itself modern Israeli, but that doesn’t mean pita dust or hummus foam.

“Israeli food in itself is modern, because it’s developing as we speak,” Shaya told Restaurant Hospitality. “There’s not an old culture to it. It’s a collection of a lot of old cultures of food that have kind of come together and begun to intermingle. And to me … that is what Israeli cuisine is: It’s this melting pot of Yemenite and Syrian and Palestinian and Greek and Moroccan and Turkish and Bulgarian.”

Since the State of Israel was established in 1948, the population has grown approximately ten-fold, according to the country’s Central Bureau of Statistics and the Jewish Virtual Library.

“You can’t grow that fast without things changing a lot, and one of the things that has changed is all those cultures that have been on the land for generations and generations are now coming and living with other cultures … and then they’re also getting married and having children, and then their children are now all of a sudden this combination, and they grew up eating their mom’s shakshuka [a North African dish of eggs poached in a rich, tomato-based sauce] and their dad’s stuffed grape leaves, and it all kind of comes together; they have a different perspective [on shakshuka] from someone who has never left Libya,” Shaya said.

“Why not?” he said. “We have great shrimp in our backyard, so why not celebrate that ingredient?”

Shaya also incorporates Southern techniques. Hushpuppies are made lighter by folding beaten egg whites into them, and it turns out that the same technique works for falafel.

“I’d never had a hushpuppy until I moved to the South, but then, once I did, I was like, ‘Oh, these are awesome, and why are they so light?’” he said.

Taking what’s around him — ingredients, technique, feedback from his staff, especially chef de cuisine Zachary Engel — and using it to make dishes from Israel even better, is at the heart of Shaya’s cuisine, but so are Alon Shaya’s food memories.

For example, the restaurant’s roasted cabbage dish is derived from a specific bite from his Bulgarian-Israeli grandmother’s dish of cabbage stuffed with lamb and rice, roasted with tomatoes, peppers and garlic.

“One of my favorite memories of food was of the stuffed cabbage that was at the bottom of the pan that kind of caramelizes a little bit,” Shaya said. “And the leaves have a little bit more bitterness to them, a little fuller flavor and almost a caramelly texture.”

To recreate that, he cooks a head of cabbage sous-vide with butter, olive oil, chile flake, lemon, orange zest and salt at 185 degrees Fahrenheit for about eight hours.

It comes out thoroughly cooked, but not falling apart. The cabbage is cut into wedges and roasted in a wood-burning oven charred and caramelized.

He serves the dish with a hazelnut and roasted pepper muhamarra, which Shaya likened to Turkish romesco.

“When you take that and rub it onto those leaves, you get a sense of roasted pepper, tomato, garlic, charred cabbage, and when you eat it all together, it really reminds me of that one bite,” Shaya said.