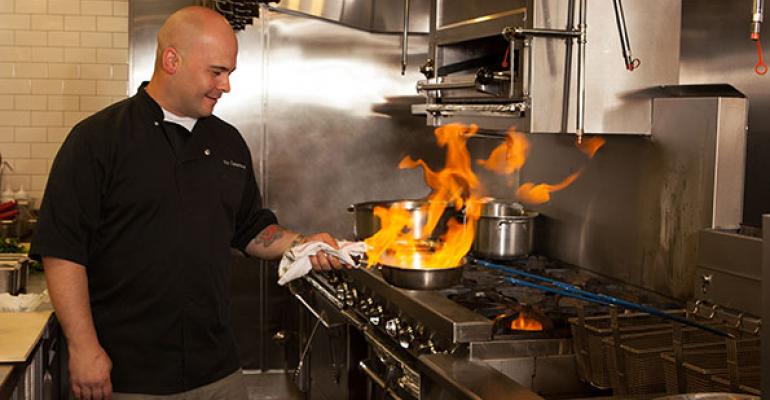 Vic Casanova finds his own voice

In the fall of 2010, native New Yorker Vic Casanova found himself back in his old stamping grounds: New York’s Little Italy. His new restaurant, Culina, had taken him across the country to L.A., but here he was back in NYC to attend a dinner for Esquire’s Best New Restaurant award winners, which included Culina. Seated to his left were Jean-Georges Vongerichten and Rick Bayless; on the right were Mario Batali and Joe Bastianich. At that moment, in the company of those culinary giants, Casanova was taken aback, finally realizing that all his hard work had come to fruition.

“That really meant a lot to me just to be in the same conversation as those guys,” Casanova says.

Culina went on to win myriad awards and Casanova, after competing in the 10th season of Iron Chef America, was thrust from a chef with a local following into the national spotlight. He eventually left Culina to open his own L.A. restaurant, Gusto, which would also be named Esquire’s Best New Restaurant 2012.

Then, in 2014, Casanova noticed a the L.A. dining scene seemed to be lacking a good Italian steakhouse. When Suzanne Goin relocated AOC from its Melrose location, Casanova found the perfect opportunity to snatch up the space and opened Pistola. Paying nostalgic tribute to Italian comfort food, Pistola’s menu features homemade pastas, prime steaks and chops and seafood.

Restaurant Hospitality caught up with Casanova to talk East Coast vs. West Coast and why he felt an Italian steakhouse was just what L.A. needed.

Restaurant Hospitality: How do the New York and L.A. dining scenes differ, and what do you miss most about New York?
Casanova: In the restaurant business you work a long day, and L.A.’s just a much earlier city than New York. I really appreciated those late nights at Blue Ribbon and things like that. L.A. isn’t short of venues and cool places to go to—I can still can be stimulated—it’s just hard to get there late at night.

RH: How have L.A. restaurants evolved over the last decade?
Casanova: The consumer is definitely way different. People even in a steakhouse environment are more concerned with eating healthier options. I firmly believe that when I start writing menus for other people it’s time to pack it up. I put food on the menu that I think is right for that moment. It’s proven to be my saving grace. When everyone else is figuring out what everyone else wants, I create what I want. I love to eat big things and big flavors. I try to serve delicious food that makes sense and is honest and soulful.

Gusto is a little, 38-seat restaurant that has a lot of swag. The dishes that put me on the map really challenge the current dining trends: Veal Sweetbread Milanese, for example. I’ve been serving that dish for almost five years in this city and people go crazy for it. It’s not the healthiest option but it’s delicious and soulful.

RH: You worked under some iconic chefs. What were some of the lessons you took away from the likes of Daniel Boulud and Scott Conant?
Casanova: Simplicity. When I turned a corner in my career is when I understood: (a) what is it that I like, and (b) how do I grow comfortable in my skin, and how does that translate into the food that I serve. I didn’t realize it at the time, but the flavors with these chefs are usually sharp and pure. Less is more. There is more emphasis spent on technique. If you care to know what’s in the cheese, it’s there and we know it.

They say there are chefs who don’t eat their own food. I eat it all the time. Sometimes I see sous chefs trying to be flavor-forward and they just don’t get it. It’s too contrived. I’ve been there. Rather than trying to be a great chef they’re flirting with trying to be an alchemist and that goes against my food philosophy completely. It’s my job to let the food shine, not to hide it or confuse it. That requires simple thinking.

RH: How do you balance the push to serve local foods with importing authentic Italian ingredients?
Casanova: If I worked in Tuscany I would be importing from Sicily. I really appreciate and treasure what’s abundant and local, no matter where that is. I use Parmigiano Reggiano because it’s the undisputed king of all cheeses. If I found a really great olive oil I would use it no matter where it came from. I would go look for it first in California because we happen to live in a place where we produce really, really great olive oil. My prosciutto is being produced in the U.S. by a gentleman who is really passionate about prosciutto. I feel more pressure to support him because that responsibility means more to me.

RH: Are you concerned about fine dining in an era when fast-casual and takeout concepts are seeing the biggest growth in demand?
Casanova: I’ve never really paid attention to the status quo. Besides, everything I’m seeing in L.A. is dictating the opposite. Everyone else is doing this gastropub style, quick bites with no real identity. And then we call it American, and that’s fine, but everyone is so focused on accessibility and I don’t do that. I opened a steakhouse because it has something to say. I had nowhere to go like that in L.A. I spent a lot of time in steakhouses and I felt like out here it was all chains and there was no identity. When you come to my restaurant you’re coming to my house.

RH: What are some of your secrets to the perfect steak?
Casanova: First, tempering the meat. Then, make sure your grill is really hot. That’s the biggest problem. You want that thing 500 degrees plus. Hot and steady—that’s how you can develop a really nice char. Char is not to be understated, caramelizing those sugars on the exterior. And then make sure the steak has the opportunity to rest. That’s a big mistake most people make, and it’s a big deal. I’ve gotten to admire rubs as a way to enhance or push flavor forward. Rubs can promote a char that’s a level above your basic caramelization.