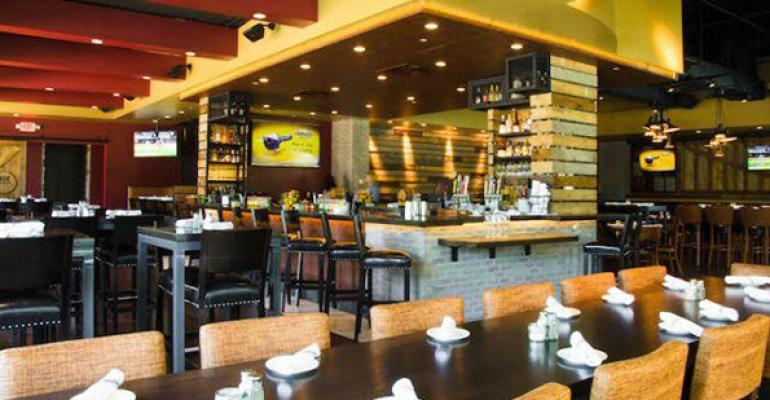 Texas has lots of restaurants that fire up mind-blowing burgers, probably even more that know their way around lick-your-fingers barbecue, but few that get both right. At least that’s the way Kent Rathbun viewed the landscape when he sat down to design a new a casual eatery. The result is Hickory, a barbecue/burger spot, that opened in June north of Dallas in Plano.

Rathbun cut his teeth cooking in white tablecloth spots and grew to national prominence with his own five-star Abacus in Dallas, followed by three units of Jasper’s, a more relaxed concept promising “gourmet backyard cuisine." What exactly does he know from burgers and ‘cue?

Plenty, as it turns out.

He has the know-how—Jasper’s Slow Smoked Baby Back Ribs are ranked among the country’s best by no less than Bon Appétit. But a plate of those ribs fetches $23-$32, a bit out of reach for many diners. Rathbun reckoned his company, Kent Rathbun Concepts, could fill that void. We recently asked him about his journey.

Rathbun: We have a grill that burns hickory and a smoker that burns hickory, so we can do both products. Why not put them together? And they’re paired with a lot of really cool sides, because a lot of the barbecue houses fall short in that area. Choices like burnt-end black beans, waffle-cut fries with Maytag blue cheese and bacon, a great green apple and jicama cole slaw, mac and cheese, crispy Brussels sprouts, jalapeno jack blue corn grits….

Stop, we’re drooling. Some of these dishes migrated over from Blue Plate, the restaurant you closed and converted into a catering operation. What happened there?

Rathbun: I still look at it as a very successful concept that was in the wrong place. The area kind of dries up and goes to sleep at night. If we had the same traffic at dinner that we had at lunch we would not have closed it. Unfortunately, the center where it was located has a multitude of owners who can’t decide how it should look and be managed, so it’s just a hodge-podge. Across the street there is another center that’s booming and fantastic at night. Until we get those two owners on the same sheet of music, it’s hard to do any business at night. We also had a lot of customers who thought Blue Plate was nicer than they expected. We learned a lot about location—it’s important to make sure people understand what they are getting into. Hickory is in a location that’s much easier to reach and in a nicer center.

After cooking Abacus-style food, what kind of philosopical shift does it take to design a menu at Hickory’s price point?

Rathbun: It’s a challenge to do that without changing the quality, yet we’re very intent on keeping high-quality products. What do you choose? There is a huge difference between the pork tenderloin that we serve at Jasper's versus the pork shoulder we do at Hickory. It comes down to portion size and balance.

The other thing that’s important to note is that we are doing everything a la carte. Our other restaurants have designed plates—a sauce, a starch, a main—and we charge accordingly. At Hickory, if you want to share a burger and a couple of sides with a friend, you are good to go. For the guest it’s more manageable in terms of price (sides run $4-$7, burgers $8-$13, barbecue around $15), and we get the opportunity to do a lot of cool things that people can share.

Do you expect to see many of the same customers who dine at your other concepts?

Rathbun: I think we will have people from the other restaurants. One thing we’ve been lucky with over the years is maintaining a good following. However, the opening of this new concept offers us the opportunity to attract new people, especially in that area. We’ve had Jasper’s up there, but nothing this casual.

Assuming it’s a winner, where do you see Hickory going?

Rathbun: Under the best-case scenario, we would like this to take off and run with it. We designed the menu to work in a number of places, not just in the Dallas-Ft. Worth area, but beyond.