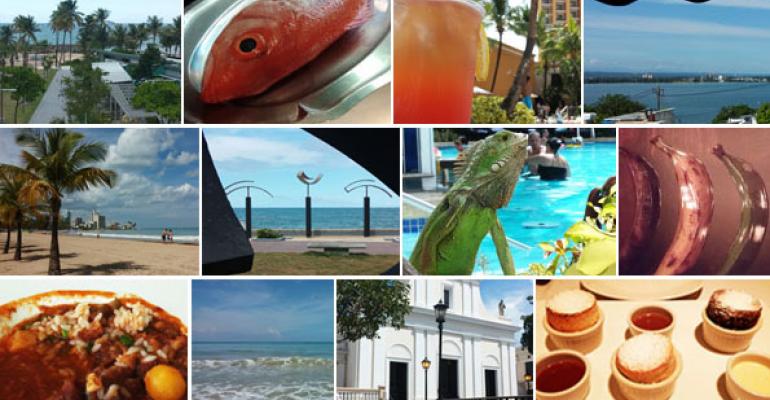 <p>The island of Puerto Rico is rich in history and culture, and with the help of a few rising star chefs, its food scene is beginning to make a name for itself.</p>
People>Chefs

Exploring the flavors of Puerto Rico

Despite the fact that Puerto Rico is a melting pot of kitchen influences, chefs of the eastern Caribbean island have over the years created a unique cuisine they can call their own.

The biggest influence on Puerto Rican cooking technique comes from Spain, which ruled the island for four centuries after Christopher Columbus claimed it in 1493. Basic ingredients include vegetables, meat and poultry, seafood and shellfish—all flavored with local herbs and spices. Traditional Puerto Rican fare includes mofongo, a fried plantain-based dish; arroz con gandules (rice, pigeon peas and pork), pasteles (a cake made with green banana and potato and filled with a stewed meat); and many variations of roasted pig.

Cocina criolla, as the locals refer to their cuisine, melds Spanish technique with ingredients that are native to the island. “You have to deal with what grows around you and the fact that not all (Spanish) technique can be used because it makes food too heavy,” says chef José Enrique, a James Beard Award semifinalist and one of Food and Wine’s 2014 Best New Chefs. “Let’s say you’re doing a Chicken Fricassee—you sear your chicken and put your veggies in. You put your wine or beer, you add water, and that’s it, you let it go. You don’t add chicken stock just to get more flavor.”

Enrique owns two restaurants and a coffee shop called Miel. By the end of this year he’ll open his new concept, El Blok, on a small island off Puerto Rico called Vieques. “I’ve always associated food and happiness,” he says, reminiscing about his grandmother cooking family meals in her kitchen.

At Pikayo, chef Wilo Benet’s flagship restaurant in Condado, the kitchen staff puts their own twist on traditional Puerto Rican fare. Counter to the popular red sofrito, Benet has created a green sauce that forms a base for many of his dishes. He makes mofongos in a wooden mortar and pestle, and he uses coconut milk and land crabs—two indigenous foods—in several dishes.

Benet, who was featured on Bizarre Foods with Andrew Zimmern and participated in Top Chef Masters, says his favorite meal to cook is fish “because of its difficulty in achieving the proper doneness, according to the different fish species.”

Puerto Rican cuisine may not have roots as deep as other worldly fares, but chefs today are adding unique twists using ingredients found on the island to put Puerto Rico’s dining scene on the map.