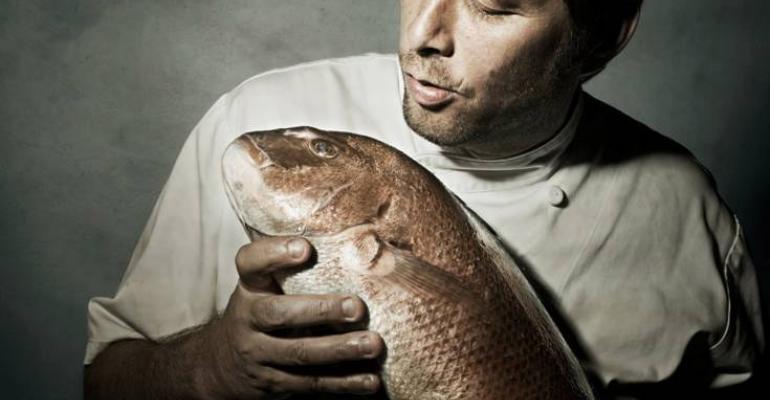 David Kinch: The tsar of terroir

Manresa, one of the world&#39;s top restaurants, has staked its reputation on a farm. Chef/owner David Kinch explains his approach.

Over the last decade, David Kinch has attained rock star status among other chefs in awe of what he does at Manresa, his farm-to-table temple in Los Gatos, CA. The intimate French/modern Catalan-style spot outside of San Francisco perennially turns up on lists of the world’s 50 best restaurants, and for six consecutive years it has earned a two-star nod from the Michelin Guide. Kinch got his start working for Paul Prudhomme at Commander’s Palace, graduated from Johnson & Wales and spent time at some of the hottest spots in the U.S., Europe and Japan before opening his own in a 1940s-era ranch-style structure in 2002. At Manresa, the menu changes daily and lists the time of day ingredients were picked. Kinch spoke recently about his passions and how he stays competitive.

RH: A lot has been going on at Manresa, including an extensive renovation. What were you trying to achieve?

Kinch: Ever since we opened, we’ve wanted to improve little by little every year. Some years that’s easier than other years, especially with the ups and downs of the economy. We always planned on a renovation, but the central piece was moving from a beer- and wine-only license to a full liquor license. Before that, we had two small dining rooms. We turned the back one into a bar and lounge and an entrance. We enclosed what was an outdoor patio so we could regain the seats we lost in the dining room. So we have the same number of dining room seats, but we picked up about 14-18 in the lounge and at the bar.

The changes make Manresa more like a European fine dining restaurant, where people go to hang out, and if they want to drink cocktails, that adds another dimension to the dining experience.

RH: Are you happy with the changes?

Kinch: I would say it’s worked out exactly as we envisioned. People come in have cocktails, relax, talk with friends; it's more spread out. Some people take a look at the menu and decide on their orders in the lounge. It’s very civilized.

Our expansion was funded by an SBA loan through the Housing and Economic Recovery Act. It was a fair nut that we borrowed, and I was nervous; I wondered whether we borrowed this money for nothing. But the first day, 16 people walked in and started drinking cocktails.

RH: By now everyone knows you source many of your ingredients from Love Apple Farm. What kind of relationship do you have with the grower?

Kinch: It’s a partnership. Like us,  Cynthia (Sandberg, the farm owner) started very small, with just over two acres. She expanded to what essentially is a farm, adding 22 acres last year, plus more recently that she will dedicate to more long-term crops and animal production. We have an exclusive arrangement that everything produced at the farm is for the restaurant. Three or four times a year—like a fashion house, we work about three seasons ahead—we sit down with seed catalogs and talk about things we want to grow, things that we haven’t grown, successes and failures.

We have kind of tailored the output to the restaurant. At the beginning we ended up with way too many salad greens and zucchinis. Melons could not get ripe in our soil and conditions. So we changed cultivars and planted things in different parts of the garden. It is an ongoing process that’s incredibly challenging and rewarding at the same time.

RH: Do you have a green thumb?

Kinch: No, but I know what I like, I do tastings and I am fascinated by different cultivars. We grow 110-130 varieties of tomatoes a year, and you might ask why? But when you taste one after another, you are astonished by the acid levels, the sugar levels, the texture—how dramatically different they are. Tomatoes are a great example—tomato salad can be very simple, just six tomatoes on the plate, but what makes it special comes not from the technique, but from the natural cultivars.

RH: How do you stay at the top of your game?

Kinch: I’m 51, I still have one restaurant and I still work until 1 in the morning. People tell me I’m nuts, but I still love to come to work in the morning. I’ve always been attracted to the culinary world because I like to eat, I’m fascinated by the potential for creativity and I like working with my hands. But most important, I enjoy making people happy, working hard and doing something I really like with my hands and getting immediate feedback. I can guarantee you that the day that feeling leaves is the day I will leave the business. This is a really crappy business if you don’t believe.

RH: And the restaurant? How do you keep it fresh and compelling?

Kinch: We’re constantly trying to improve it. The farm continues to get bigger and better and is a great inspiration. And I still love to travel and eat. I’m inspired by what I read and where I go and try to incorporate new ideas.

Kinch: I’ve been going to Japan once or twice a year for four years or so. It’s really hard to find a better gastronomic or culinary country on the planet. Tokyo is probably the best restaurant city in the world. I don’t think there is any close competition, from the quality of the ingredients to the technical skill and training of the workers. The food is healthful, uses hardly any fat, has really well-balanced flavors and is incredibly complex. And they pay an inordinate amount of attention to how food is served. That doesn’t mean I come back and create Japanese dishes, but these are tenets that I like to apply.

Every time I go there I feel like a newborn baby. I will order a dish with familiar ingredients, that, if I had it in a western restaurant, I could tell you how it’s going to taste, what cookbooks the chef has read and where he’s worked. But in Japan, I have these three ingredients put together in a simple way completely different from anything I’ve seen before. That’s why I like to go there.

RH: You’re doing a few “cooking with friends” dinners with some big names to celebrate your 10th anniversary. How did you choose the guest chefs?

Kinch: We started bringing guest chefs in around 2006, when we brought in some European heavy hitters. We did it so people could try food by chefs who inspired others. It was great for our cooks; they had to work harder and longer, but they had a chance to see new things as well.

This time around, we’re bringing in Michael Cimarusti (Providence Restaurant, L.A.) and Carlo Mirarchi (Roberta’s, Brooklyn, NY) because they are close friends and we want them to be part of our anniversary; and John and Karen Shields (most recently with Town House in Chilhowie, VA), who seem to be a great representation of the next generation of fine dining in America. We also invited back a bunch of old kitchen employees and chefs who have worked with me over the past 10 years. They have been major parts in the restaurant’s success, and they’re all going to do a course. We’ll celebrate.

Gavin Kaysen shares his experience as a restaurateur, competitor, and caterer for athletes
Dec 09, 2022