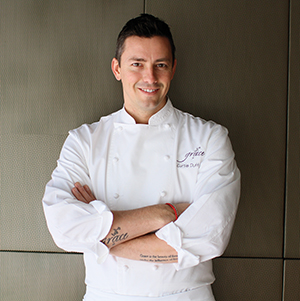 Born and raised in Columbus, Duffy left Ohio in 2000 to work at the legendary Charlie Trotter’s in Chicago. After three years there, he left to accept a position as pastry chef at Trio, where he was recognized by Food & Wine as “Best Innovative Pastry Chef.” Duffy met Grant Achatz at Trio, and in 2004 they left Trio to open Alinea, where Duffy worked as chef de cuisine. In 2008, Duffy left Alinea to head the kitchen at Avenues, where he blew the critics away and garnered a Rising Star nod from RH. The James Beard Foundation also declared him a “Legacy Chef.” In 2012, Duffy opened his own Chicago restaurant, Grace, which has been awarded two Michelin Stars.

1. My two daughters. Honestly, I don’t know where I would be without them. They keep me laughing and they inspire me creatively on a daily basis.

2. My Harley Wide-Glide. It’s rare that I have time to myself, but when I do it’s spent on my motorcycle. It gives me an opportunity to get outside of the city and catch a breath of fresh air.

3. Kaffir lime. This is one of my favorite ingredients in the world. It has a very distinct flavor that I find almost haunting, and it works well in both sweet and savory dishes.

4. Aged pu-erh tea. This has actually become a bit of a problem for me, because the stuff’s not cheap. I’m totally addicted to it, and it has almost completely replaced my coffee in the morning.

5. My gym. I think it’s important for me to stay fit and healthy. First of all, I have to keep up with my daughters, and my job is physically demanding as well.