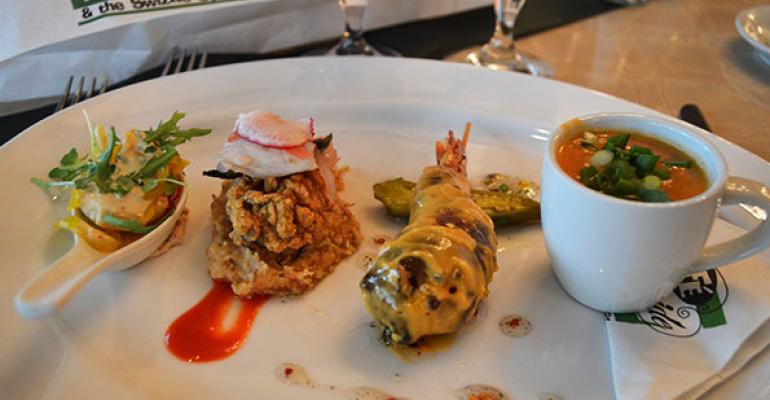 Cultural diversity leads to layers of flavor in New Orleans

New Orleans is the land where pretty much anything goes. That said, one thing you don’t want to do in New Orleans is confuse Cajun and Creole cooking.

Today, chefs are blending techniques from each and the differentiation is a bit less black and white. Each ancestral group has put its own twist on a lot of the same dishes; gumbo and jambalaya being the two most well known.

What do jambalaya and gumbo, as well as most other Southern Louisiana dishes, have in common? Café Adelaide executive chef Carl Schaubhut says they’re each built on a principle of layering ingredients and building flavors as the dishes are prepared. Most often, traditional New Orleans dishes require starting with a roux and building in a stock, as well as browning vegetables and protein.

The result? Just as the culture of New Orleans has many layers, the city’s food involves flavors that go beyond the surface.

Today, chefs like Schaubhut in New Orleans are building upon those traditional influences, adding new and fresh ingredients and putting their own twists on Cajun and Creole classics. Call it “modern Creole” or “contemporary Cajun” or just simply call it delicious.

Take, for example, Schaubhut’s “playful modern Creole,” using all the influences from the South but adding modern influences as well. His New Orleans East BBQ Shrimp is a play on a classic New Orleans dish with a variety of Vietnamese flavors introduced. He makes his own kimchi, boils the local Gulf shrimp and adds a BBQ glaze featuring Asian ingredients. The result is a fresh take on a tried and true Louisiana classic.