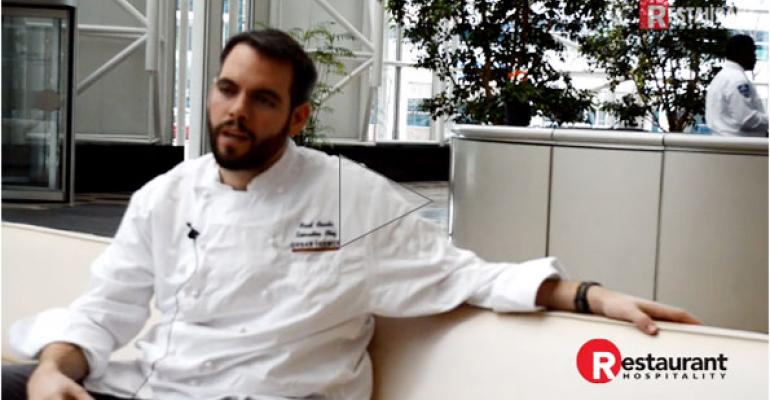 A chef adopts a new home and its bounty

It’s not often a chef can tell you where the fabric covering the booths in the dining room was sourced. But executive chef Brad Cecchi knows his Urban Farmer restaurant like the back of his hand. And he should, given the amount of time he’s spent on site as the restaurant gears up to open its doors at the new Westin Hotel downtown Cleveland.

When Cecchi walked me around the nearly finished farm-to-table steakhouse last week, he was on his 42nd consecutive workday. For most, that’s insanity. To him, it’s just part of the gig.

“This opportunity to do a meat-centric restaurant using the whole animal is just my MO,” says Cecchi, who has been cooking professionally from California to Maine to Europe since he was 15. “The credo of the Urban Farmer brand in general just fits my style.”

Restaurant Hospitality has been following Sage Restaurant Group every step of the way as it works to open Urban Farmer on May 15, from concept to final touches. Cecchi has been along for the ride since the beginning.

The chef began his career as a sous chef at Grange Restaurant and Bar in Sacramento, attached to the Citizen Hotel, where he learned the nuances of serving hotel guests as well as outside diners. He later cooked at the Broadmoor Hotel in Colorado Springs before moving to Bar Harbor, ME, where he “bummed around on friends’ couches” working in various restaurants. His big step came when he moved to Europe for eight years, learning an alternative culture and developing his passion for cured meats. Cecchi eventually made his way back to the states and enrolled at the Culinary Institute of America, where he learned the importance of “owning the locality” in his restaurants.

After spending some time learning Urban Farmer concept at The Nines Hotel in Portland, Cecchi and his then-girlfriend moved to Cleveland in February—perhaps the least favorite month of the year for locals because of the above-average amounts of snowfall and downright frigid temperatures (You heard about the Polar Vortex, right?). Partnering with local farmers to grow ingredients for the restaurant seemed far off, if not impossible. So he and his girlfriend spent the first month eating around town, meeting Cleveland’s rising chefs and learning the Midwestern dishes that are so familiar to Cleveland. He proposed to his then-girlfriend in Michael Symon’s Lola.

“There’s a lot of water; the elements are totally different,” Cecchi says of Cleveland. “I’m taking it as a challenge.”

With the spring thaw, Cecchi began making his way to farmers markets all over town, meeting farmers and promoting the new restaurant. He began learning all about the different breeds of cattle—there are plenty to choose from in Ohio—and met Ohio farmers who are raising grass-fed, pasture-raised and corn-fed beef. Now Cecchi can tell the difference between a cut of Texas Longhorn beef and a cut of Belted Galloway beef by comparing them on side-by-side plates. He’ll bring his knowledge of charcuterie to Cleveland, where vast amounts of livestock will help broaden the offerings. He’ll hone his craft on a beautiful Berkel prosciutto slicer that will also serve as a decorative art piece in the front of the restaurant.

A true farm-to-table concept “allows you to get to know the pulse of the world around you,” Cecchi says. “You can get to know the farmers and understand what’s going on in their minds, whether that’s seed costs or water costs, for example.”

But ultimately it’s the freshness of the product that gets Cecchi excited about local sourcing. “You go to the supermarket and buy a carrot, and you think that’s what a carrot tastes like, until you taste an actual carrot (grown locally),” he says. Many other fruits and vegetables lose taste the further they are shipped and the more time that passes before they are eaten, Cecchi says, because sugars in the food turn to starches.

As important as local sourcing is for taste, communicating the dedication to home-grown ingredients to diners is important for business. There’s a section on Urban Farmer’s menu that will thank the partners who are providing ingredients. Chalkboards around the restaurant will feature pictures and stories of local farms and farmers.

Will Clevelanders, who have embraced the farm-to-table movement in higher-end restaurants, fully appreciate the concept? “I’m not sure, but they’re going to think it’s delicious,” Cecchi says.