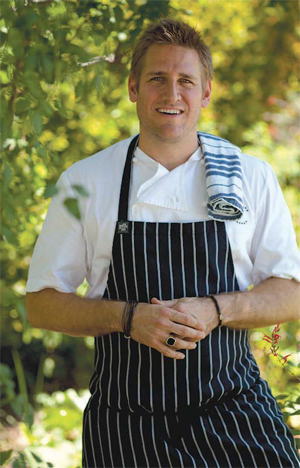 Curtis Stone is an internationally known chef and the host of Bravo’s Top Chef Masters. Earlier this year he released his fifth cookbook, What’s For Dinner?

1. One thing you don’t know about me is that I used to have lots of photos of Tina Turner on my wall. I really wanted to be her boyfriend!

2. If I could trade places with one chef it would be Thomas Keller of The French Laundry in Napa Valley. I would take advantage of all the beautiful fresh produce he grows within a stone’s throw of the restaurant.

3. One of my most memorable meals was at Attica in Melbourne. The restaurant is the very essence of Ben Shewry, Attica’s wildly talented chef, who commutes 2 hours a day from the Bellarine Peninsula to get to work. His food, much of which has been foraged from the beach and grown in Attica’s own gardens, is strikingly graceful and deeply rustic.

4. If there were no crab, I’d have no reason to live. I think that’s probably my favorite savory ingredient because it’s so adaptable. You can do a chili pepper crab, you can do curried crab, you can do light salads.

6. If I were on death row my last meal would be roast lamb with crispy potatoes and green peas. My granny used to cook this dish for me. It’s really simple but I love that sort of beautiful home cooking.

7. My worst culinary creation was made for my sister and all her friends. I was running a new restaurant in London called Bluebird. They had this big, old fire oven, and it hadn’t been used for a couple of years. I wanted to see how hot this oven could get, but all this smoke was coming out into the restaurant. There wasn’t an appropriate fire void above the oven, so it started a fire in the ceiling. I almost burned down this incredible, AAA-rated heritage building in the name of cooking this massive meal for my sister.

8. If I could change one thing about me it would be a couple of decisions I’ve made along the way. But then again, I think mistakes are in our life for a reason and you have to try and learn from them, which is the fun part.

9. My favorite junk food is chocolate. I’m a self-confessed chocoholic.

10. If I wasn’t a chef/restaurant operator, I’d love to be a gardener. I’ve spent a lot of time in the veggie garden. And it sounds pretty simple, but to grow delicious vegetables and protect them from the pests and allow them to ripen on the tree or bush or vine before you pick them is actually a bit of a hidden talent.