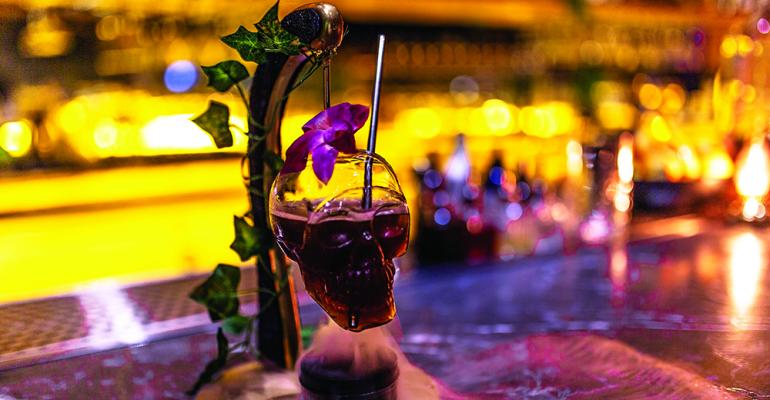 A respectable sizzurp in honor of a rapper

Where to find it: Louisiana Purchase, San Diego

At Louisiana Purchase in San Diego, the menu is all about New Orleans and the chef’s creole roots. Carrying that to the bar, beverage director Rob McShea wanted to create a memorable cocktail that referenced Louisiana native Lil Wayne, sometimes known as Lil Weezyana, and his sometimes dark lyrics with tales of an high-inducing sweet concoction (often cough syrup and soda) called sizzurp.

“I wanted it to hit all the senses,” said McShea of the drink. It starts with a blend of rum — Puerto Rican style (“which is flat”), a high-alcohol overproof to give it punch and a Jamaican to add a smoky, caramel flavor.

Next he adds huckleberry cordial, to add sweetness and color, along with squid ink to deep the  darkness without the use of charcoal. “The squid ink has a surprising anise-y flavor,” he said.

The cocktail is balanced with lemon juice, the Italian bitter Amaro Averna, and finished with  black walnut bitters, which McShea said gives it a more classic tiki profile.

To fuel Instagram fire, the drink is served in a glass skull suspended over dry ice, onto which the server pours water infused with eucalyptus oil to awaken the senses as it’s served.

The Weezyana Sizzurp has been on the menu since the restaurant opened in May and it’s been a hit, he said. “After seeing the video, one couple flew out from New York to try it and then flew back,” he said.