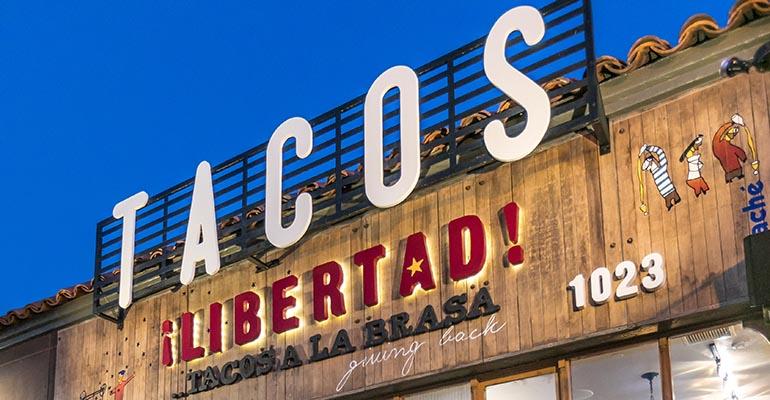 Tacos Libertad debuts with 100-percent of proceeds for charity

Looking for a more creative way to give back, the Cohn Restaurant Group has launched a not-for-profit taco shop in San Diego with 100-percent of proceeds donated to local charities.

The 34-seat Tacos Libertad, with a lineup of gourmet globally-inspired $5 tacos, opened about 10 weeks ago next door to the group’s full-service concept Bo-beau Kitchen. At the back of the taco shop is an adjoining speakeasy called Caché.

All money made after operating expenses will be donated to a local charity selected each month by an advisory committee of volunteer community members.

But, because restaurant profits can be slim and a long time coming, Cohn said the restaurant is guaranteeing a $3,000 minimum donation each month, regardless of the restaurant’s earnings.

Sales will cover cost of rent and labor, but Cohn said the group will not take a cut and will not attempt to recoup the $500,000 investment costs to build the taco shop. It’s really an extension of Cohn Restaurant Group’s history of giving over the years, with 25 restaurants in Southern California and Hawaii. But it also builds bridges within the community, Cohn said.

“It’s a community resource,” he said. “It feeds people literally and it feeds souls. And that’s something we wanted to do.”

Cohn said he was inspired by the pub Oregon Public House in Portland, Ore., which opened in 2013 and has raised more than $141,000 for local non-profits with a similar model.

On the East Coast, CookNSolo, parent to the Federal Donuts chain and higher-end restaurants like Michael Solomonov’s Zahav, earlier this year opened Rooster Soup Co., with all proceeds going to programs that feed those in need. Libertad, meanwhile, will help raise money for any number of local causes. Non-profits are invited to apply with a video at tacoslibertad.com, and the advisory board will make the selection. Once chosen, the charity cannot be selected again for at least 36 months. Libertad’s menu will feature tacos prepared “a la brasa” on a wood-fired caja China roasting box, with offerings like shrimp, skirt steak, pork belly, duck confit and octopus. Tortillas are made from scratch daily, and the menu includes churros, beer and wine and natural sodas.

Cohn said the concept hasn’t made a profit so far, but that’s not unusual for a restaurant in early weeks.

“We think we’re trending toward being profitable,” he said, noting the restaurant will also shave costs by sharing a building and patio with the restaurant and speakeasy, including things like restrooms.

Cohn said he hopes to see more than the $3,000 minimum flowing regularly to charitable organizations in the San Diego area, particularly the smaller groups for whom a few thousand dollars can make a huge difference.

“The not-for-profit thing isn’t that new,” he said. “But the idea of guaranteeing a donation was something I haven’t seen anyone else do.”