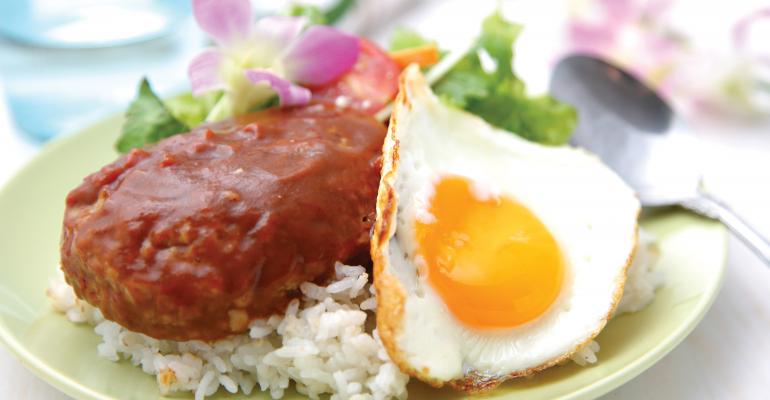 deeepblue/iStock/Thinkstock
Loco moco is a classic Hawaiian dish that is being reimagined by chefs on the mainland.
Trends

In Brooklyn, N.Y., Onomea is dishing out classic Hawaiian dishes such as kalua pig, or slow-cooked pulled pork that it serves with cabbage, and loco moco, a teriyaki burger topped with a sunnyside up egg and brown gravy, served over rice. Another classic item, Spam musubi (think sushi rolls filled with Spam in lieu of seafood) is also on the menu. On the West Coast, at Ma’ono in Seattle, chef Mark Fuller is creating dishes inspired by his Hawaiian heritage and starring ingredients from the Pacific Northwest and the Pacific Rim. Of particular note on the menu is saimin, which is like a Hawaiian-inflected ramen. Ma’ono’s version features smoked pork and ham broth, five-spice pork belly, soft-cooked egg, fish cake, noodles and salted gai choy, or mustard greens. Noreetuh, in New York City, offers a modern take on Hawaiian food that blends Polynesian tradition with other cuisines. Italian flavors are represented with the kalua pork cavatelli, which puts pulled pork and cabbage in a pasta dish topped with Parmigiano-Reggiano, as well as with the Spam agnolotti. And a pineapple-braised pork belly dish is served with German spätzle.