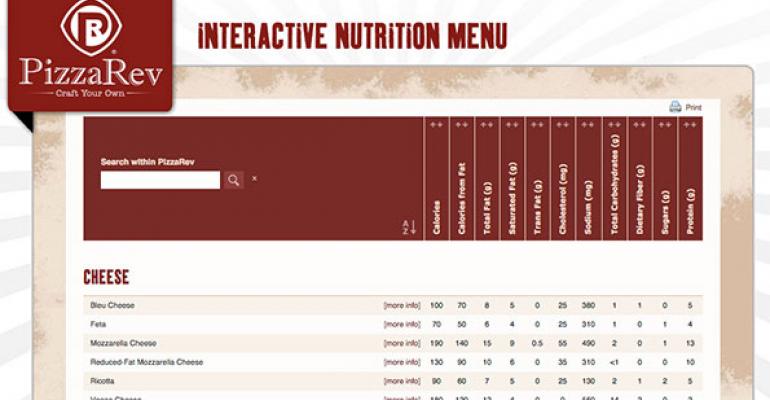 &bull;&nbsp;Smaller chains and independent restaurants serve up just as many calories as those in the quick-service segment &bull;&nbsp;19-unit&nbsp;PizzaRev will add calorie counts to its menu boards in compliance with federal regulations &bull; The impact of menu labeling on obesity and health is still an open question

Even though it’s not mandatory, independent restaurants should consider whether offering diners more nutrition information would benefit business.

A number of studies have shown that some consumers want to see calorie counts and will make decisions on where to go based on this information.

Despite popular belief, smaller chains and independent restaurants serve up just as many calories as those in the quick-service segment, according to research from Tufts University in Boston. The study, cited in the NY Daily News, tested 157 meals from 33 individual or small-chain restaurants and found the average meal contained two to three times the calories a person needs at a single sitting, and more than half what is needed for an entire day.

The Food and Drug Administration recently ruled that, by December 2015, all restaurant chains with 20 or more units will be required to post calorie counts for standard menu items on menus and menu boards, as well as offer more detailed nutrition information on request in restaurants. Changes to menus and menu boards will be necessary so that restaurants comply with the new federal rules.

An article in Nation’s Restaurant News cited PizzaRev, a small-but-growing fast-casual pizza chain, which will be among those posting calories for the first time. PizzaRev recently unveiled a new online nutrition calculator that lets guests use their own devices to determine calorie counts as they build their pizzas with various toppings. Soon, PizzaRev will add calorie counts to its menu boards in compliance with the federal rules.

The information is what consumers want, said Nicholas Eckerman, PizzaRev’s cofounder and chief operating officer. “We want to move toward further transparency,” he said.

One of the main debates regarding the display of calorie counts is whether they will significantly change consumer behavior.

An article in the New York Times says the impact of menu labeling on obesity and health is still an open question. Some studies have shown no effect, while others found one. A 2008 study of 100 million cash register transactions at Starbucks found a 6-percent decrease in average calories purchased after the company started posting calorie counts.

In the end, restaurants that choose to alter their menus and signage will be stuck with the bill. Anita Jones-Mueller, president and founder of San Diego-based Healthy Dining, told NRN changes would require a dedication of time and energy.

“It’s not as easy as just printing the calories on the menu for most restaurants,” she said. “It will take some time to look at whether there’s a way to design the information so guests can use it better.”