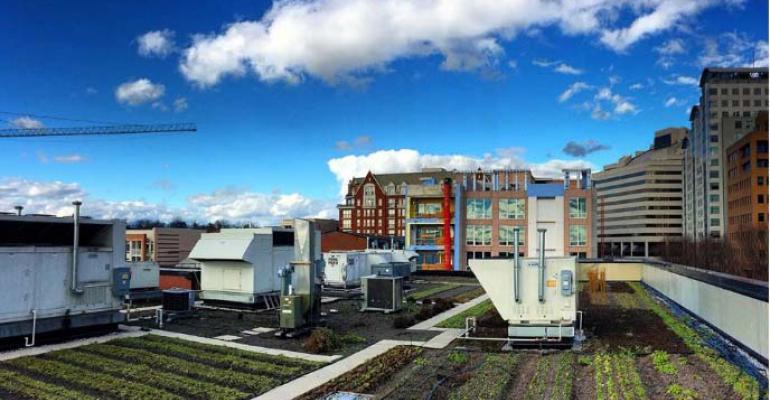 <p>Up Top Acres designs and operators commercial rooftop gardens like this one in Washington DC.</p>
Trends

Rooftop gardens do a lot for restaurants, providing ultrafresh produce, a ton of farm-to-table and sustainability street cred plus, occasionally, a cool space to host special events—unless you’re keeping bees. But now we’re learning that landlords benefit from gardens, too, thanks to the economic boost and culinary cachet their properties enjoy. The next time you’re negotiating a lease, check to see whether the building’s owner might provide an incentive to install a rooftop garden—or, better yet, do it themselves.

Too far-fetched? It’s already being done.

That space was converted to a rooftop farm in 2015 and grew 7,000 pounds of produce in its first year of operation. This year’s goal: 10,000 pounds of salad greens, carrots, herbs and other specialty produce. Federal has even produced a video that touts the garden and its use by Jaleo:

“The benefit we really enjoy out of it is the enhanced connection with our tenants, but we also save them the money of maintaining the roof by doing things in a slightly better way,” says Chris Brown, Federal Realty’s sustainability manager.

Neither Federal nor the restaurants do the actual farming at Bethesda Row. That job is outsourced to Up Top Acres, one of several companies that have gone into the commercial rooftop farming business. Up Top also operates The Farm at Oyamel, a 700 sq. ft. growing space in DC’s Penn Quarter. ThinkFoodGroup restaurants nearby–including Oyamel, China Chilcano, the original Jaleo, Minibar and Zatinya—share the micro greens, herbs and edible flowers produced by this farm.

Up Top describes the benefits to restaurants this way.

“Rooftop agriculture offers incredible value to restaurants. Not only does it allow chefs to source the freshest, highest quality produce, but it gives them the opportunity to experiment with different varieties of hard-to-find fruits and vegetables.

“The cost savings can be significant, with a 100 sq. ft. growing space able to produce up to 200 pounds of food annually,” the company says.

A separate set of benefits accrues to the building’s owner. Up Top claims that a 20,000 square foot roof garden can generate more than $40,000 in storm water retention credits annually, can last three times as long as a conventional roof and can reduce building heating and cooling costs by 10-20 percent.

Twenty thousand square feet sounds like a lot, but rooftop farming is turning into big business in some urban locales. Among the players: Green City Growers in Boston, whose Fenway Farms rooftop garden helps feed Red Sox fans; Seattle’s Urban Farm Company; and Farmscape in L.A. Gotham Greens  is the biggest rooftop grower. It has four locations split between New York City and Chicago. Its Queens location already produces five million heads of leafy greens per year. The new Chicago location will be even bigger, a 75,000 sq. ft. operation that aims to produce 10 million heads of lettuce annually. The company’s controlled growing environments—its farms are on rooftops, but employ greenhouses—produce 20 times more crops per acre than traditional methods. New York City’s Gramercy Tavern is just one of Gotham Greens’ many restaurant customers.

Many restaurants will continue to take the DIY approach to rooftop farming. But if that’s not you, talk to your landlord to see whether a mutually beneficial deal might be reached. If Federal Realty is right, rooftop gardens might be a better deal for a building’s owners than its tenants.