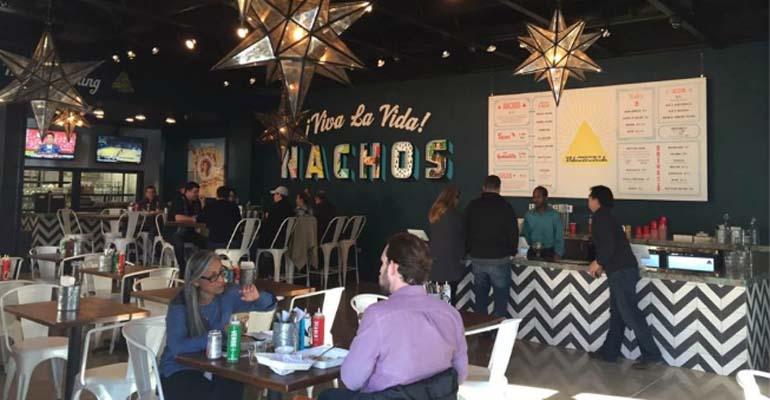 Restaurants that specialize in a particular Mexican dish usually start small, often as a farmer’s market food stand or maybe as a food truck. But two single-item concepts that fit this description have gone all in right from the start, thanks to the financial and culinary connections of their owners. Newly opened Nachoria in suburban San Francisco comes from Zappos founder Nick Swinmurn, while three alums of Restaurant Marc Forgione are behind New York City’s Taquitoria, with Iron Chef Forgione himself on board as an investor and frontman for the restaurant’s just-opened second unit.

Nachoria, which bills itself as a “purveyor of the triangular arts,” opened in Burlingame, CA, in early January. Its signature offering is a far cry from the refried beans, cheese and salsa-laden “loaded”-style nachos served in sports bars and casual dining chains.

The menu at Nachoria features $12 plates of nachos that customers accessorize Chipotle-style. Every order at this counter-service operation starts with a plate of house-fried corn tortilla chips topped with the restaurant’s special homemade cheese sauce, fire-roasted red peppers, caramelized onions, green onions and queso fresco. From there, patrons have a choice of meat—pollo asada, carne asada, carnitas—or a veggie option. An upgrade to “diablo shrimp” costs an extra $2. Side order options include guacamole ($5), beans ($2.50) and rice ($2.50). Tacos (three for $9) or quesadillas (three for $10) work the same way but the nachos are far and away the primary focus.

Any of eight Mexican beers go for $5 apiece. Micheladas cost $7, margaritas $9 and other cocktails are available from Nachoria’s full bar. Red or white house wines are priced at $12. The dessert list includes flan ($3) and tres leches cake ($7).

Right now, Swinmurn has the all-nachos restaurant category to himself. Funding shouldn’t be a problem if he decides to expand. He left Zappos in 2006, but hung on to 11.2 percent of the company’s stock until Amazon purchased the online shoe retailer in 2009. Swinmurn’s share of the proceeds: roughly $103 million.

Nachoria is positioned as a family-friendly venue with an $8 kids menu (drink included) and a spacious, attractive dining area. Taquitoria targets a different crowd.

Initially, this concept did most of its business with the late-night stoners and bar hoppers who frequent or reside near its original high-traffic location on Manhattan’s Lower East Side. To accommodate them, the restaurant stays open until 2 a.m. during the week, 4 a.m. on the weekends.

This taquito-only joint was started in 2013 by three friends who met while working at Marc Forgione’s flagship restaurant. Two of them—Barry Frish, who had been Forgione’s chef de cuisine, and Brad Holtzman, who served as that restaurant’s hospitality manager—left to start Taquitoria. The third partner, Matthew Conway, was then and is now Restaurant Marc Forgione’s sommelier and general manager.

The trio went with a stripped-down menu that offers just one item: the rolled and fried taco known as a taquito. Customers can order either three (for $6) or five (for $9) taquitos. They can pick one filling (beef, pork, chicken or black bean) and one topping style. Topping options are the classic (guacamole sauce, shredded lettuce, cotija cheese), the cheesy (nacho cheese, sour cream, pickled jalapeno relish) or, for $3 extra, the chronic (both toppings). There are just two sides: rice and beans for $5 and chips and salsa for $3.

Yet serious culinary ambition drives the concept. Among other touches: the beef comes from Creekstone Farms, the chicken from Bell & Evans and Berkshire pork goes into the pork taquitos. “To call these anything but the highest quality street food you can find would be a disservice to the work that goes into it,” says Frish.

Both Nachoria and Taquitoria are proving that mainstream diners crave Mexican dishes other than tacos and burritos. If your organization is tinkering with the idea of starting a fast casual concept, take a closer look at how these two newcomers have pulled it off.