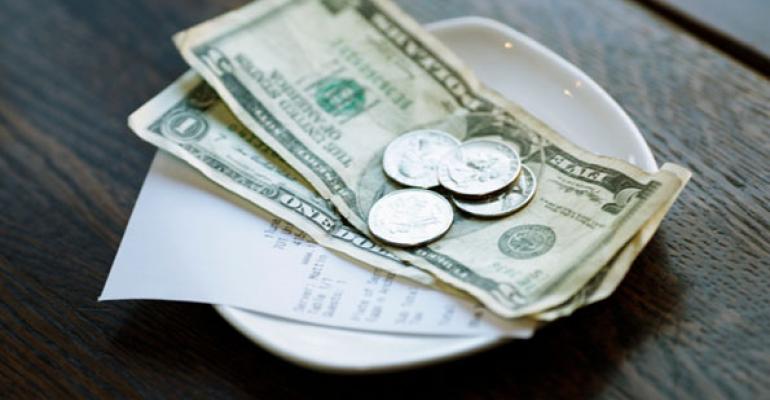 Even servers are torn on the issue. In places like Seattle and San Francisco, where minimum wage is $15, eliminating tips might not cause much of a stir, but in most other cities, where service staff often makes less than $5 an hour, it could have a bigger impact.

Dirt Candy owner Amanda Cohen is experimenting with a new model of compensating employees—with varying results. After Dirt Candy recently reopened in a larger space, Cohen eliminated the line to write in a tip on Dirt Candy’s checks. Instead, a 20 percent “administrative fee” is tacked onto every bill and goes toward employee salaries, for both servers and cooks. The starting salary at Dirt Candy is $15 an hour, nearly twice the minimum wage in New York ($8.75), and three times the minimum wage for foodservice employees who get tips ($5).

“Everybody works for me,” Cohen told the Washington Post. “I should be the one to pay them.

“The idea that if you get bad service, you get to punish the server—that’s awful,” Cohen continued. “All the negative comments have been, ‘But what if the service is bad?’ And my response is: ‘Then complain, say something to the manager, let the restaurant take care of it.’ Not, ‘I’m going to decide how much I’m going to pay you for your job.’ Nobody works that way except servers.”

But one server told Eater—albeit anonymously—that if his restaurant introduced a similar policy, he’d be out the door.

Tipping is “a cruel institution created by greedy Depression-era restaurateurs, one that neither customer nor employee comes away from feeling great most of the time,” the Seattle-area fine-dining server wrote on Eater.com. “But for all the saltiness I get from the whole scheme of tipping, I still wouldn't give it up.”

The server/writer opened up about his finances, revealing he averages almost $33 an hour plus wages of $12 per hour ($2.53 more than the state minimum). Working 32 hours a week, last year he brought in $42,000.

“The day tipping is abolished and I'm making a guaranteed $20-$25 per hour—effectively taking a pay-cut—I am going to pick (a) career path that has room for growth and doesn't require me to run my ass off for eight-hour shifts,” he said. “And I imagine many in the industry would agree, which would lead to a talent drain across the field. So you'll not only be paying 15 to 20 percent more for your meal (it just won't be an optional tip), but you'll also be getting worse service during it.”

According to Seattle Met, Ivar’s Salmon House in Seattle recently replaced tipping with a minimum wage increase for all its employees, to $15/hour. In so doing, Ivar’s is leaping all at once to a minimum wage level other Seattle businesses are starting to climb up to incrementally, per last year’s City Council vote.

To compensate, Ivar’s will bump menu prices up by 20 percent. Tips above that will be discouraged, but not outlawed; diners will be able to add a gratuity if service so moves them.

In Philadelphia, management at the William Street Common ask its servers to return tips to their diners, saying "You left something behind." A 20-percent service charge has already been added to each check, and that money—plus a match from the owners—first goes toward paying salaries, according to an article on Philly.com. All employees earn at least $15 an hour.

William Street Common owner Avram Hornik told the site the model might not work for every restaurant or bar, but he is hoping to build a space where patrons can linger without feeling pressure to leave and all employees are fairly paid, even if the tables don't turn over quickly.

We can all agree that servers and back-of-house employees need to be compensated fairly. But which pay model works for your service staff, while allowing your restaurant to continue providing excellent service, might not be an easy choice.

We're curious: Would moving your service staff to hourly/salary hurt or help your bottom line? Leave us your comments below.