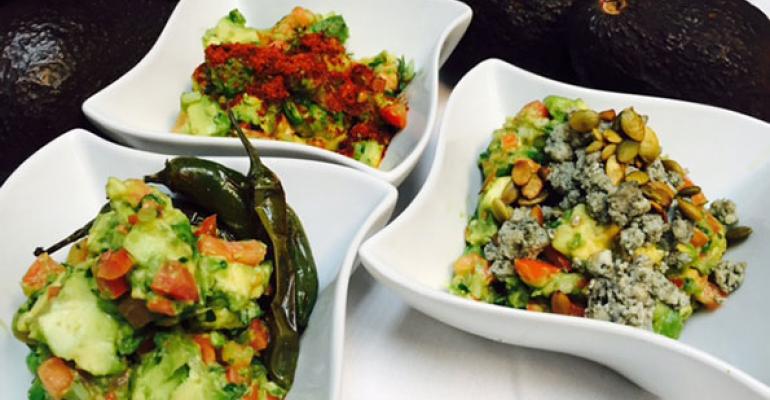 Trendinista: How restaurants can prepare for the Super Bowl

Super Bowl Sunday means super results for many restaurants. But prepping for game day is a different process than getting ready for just another busy Friday or Saturday night.

Adequate staffing is one of the biggest concerns. Bars will be likely be busy during the game, dining rooms pre- and post-game and takeout/delivery before and during Super Bowl.

Whether you're a football fan or not, know the time and date of the game—Sunday, Feb. 1 at 6:30 pm ET—and expect it to run long. You might not be turning tables for three hours, but your bar staff will be plenty business pouring beers and your to-go station should be well prepared.

"We will be bringing in some extra staff, mainly for the bar and handling the phones,” says Alex Mendelsohn, part-owner at Orale Mexican Kitchen in Jersey City, NJ. "There is

a drastic increase of delivery orders on game day, so we will be offering an advanced ordering option to expedite deliveries: people can call us the day before and order guac, tacos, whatever they want and specify a delivery time.”

Arooga’s, a new-age sports-bar concept with nine locations in Eastern Pennsylvania, expects Super Bowl Sunday to be the busiest carryout day of the year by far. Even though the bar-restaurants each feature more than 100 TVs, management understands most football fans enjoy a house party for the Super Bowl and therefore shifts focus to providing premium carryout options. Arooga’s offers a tailgater package for $45.99 that includes 40 wings split into two styles and sauces, 2 strombolis and a 2-liter of soda.

The stakes are huge. According to the National Restaurant Association, an estimated 48 million Americans ordered takeout or delivery food from a restaurant while watching the 2011 championship game (the most recent data available). The NRA says chicken wings, pizza, salsa, dips and spreads are the go-to foods for watching the Super Bowl.

Arooga’s prepared more than 7 tons of wings to-go last year and expects to do more than that this year.

Wings flying out the door

Wings are a staple for most in-house dining and take-out orders during the big game. According to a Bloomberg report citing the National Chicken Council, Americans will consume 1.25 billion wings on game day.

Wing prices, the report says, are having the biggest run-up before a Super Bowl in three years. The product this year is expected to be fat but pricey. American farmers are giving their chickens extra feed, taking advantage of plunging corn and soybean costs to help lift poultry production. But the number of chickens slaughtered last year fell, causing a drop of about 50 million wings and subsequent price hikes, according to Bloomberg.

One restaurant owner, Rick Ritacco of Wings Plus in Port Washington, NY, told the New York Times guests should order their food a week before the Super Bowl. “Everyone wants their food at 5 p.m., and those pickup times book up fast,” he said.

At Wings Plus, not surprisingly, Super Bowl Sunday is the busiest day of the year. Before halftime, Ritacco expects to serve 20,000 bone-in chicken wings and 10,000 boneless wings, doing three weeks’ worth of business in eight hours.

The Twin Peaks chain is pitching a Super Sunday watch party as a “blowout" featuring a raffle of two tickets to NFL draft day in Chicago, including hotel and airfare. Each Twin Peaks location will also offer prizes and giveaways for quarter breaks and football squares during the game. Twin Peaks will be slinging BBQ Pulled Pork Nachos and Spicy Buffalo Wings to accompany freezing, 29-degree draft beer served by the Twin Peaks Girls.