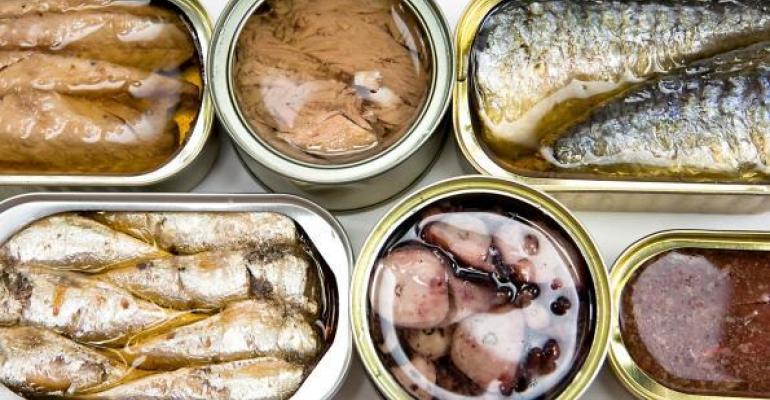 Sushi joints and raw bars still rule, but some serious eaters now get their kicks from cans

We’re not talking about the commodity kind found on U.S. grocery stores shelves, but artisan-caliber fare imported from Europe. A handful of pioneering restaurants already offer these delicacies on carefully curated lists; given the category’s microscopically low barrier to entry, other operators could soon follow suit.

“The European tinned seafood we source is from smaller boutique canneries that work with fisherman who sustainably catch in season,” they say. “Everything is hand-cleaned and hand-packed with high-quality olive oil, vinegar, vegetables, and herbs, and there are no other preservatives, unlike the American versions which are overwhelmingly part of the industrial food chain.”

How’s it taste? “It’s the difference between canning hothouse tomatoes in January and canning heirloom tomatoes in August,” they argue. “In-season is fresh, ripe, delicious and worth preserving. The alternative is lifeless.”

The 38-item “Tins” section of Maiden Lane’s menu incorporates three kinds of anchovies, eight styles of anchovies, three types of octopus, three brands of mussels, five varieties of oysters (sourced from a U.S. microcannery), a pair of squid options, two types of cockles (priced at $50 and $55 per tin) plus single offerings of tuna belly, cod liver, razor clams, scallops and mackerel. Most choices are priced in the high teens or low twenties.

Seem like a crazy concept? It’s already spawned a second Maiden Lane location and an online retail business, too. Fallon and Maccubbin note that tinned seafood is particularly practical from the restaurant operator’s point of view.

“Tinned seafood is the quintessential cocktail and bar food,” they point out. “It is shelf-stable, requiring no refrigeration; can be opened by a bartender or host and served with a baguette, salad, or sandwich; is high in protein; and goes perfectly with wine, beer, and spirits.”

No wonder operators elsewhere have begun to follow in Maiden Lane’s wake.

Boston’s Saltie Girl offers a whopping 64 items on its tinned seafood menu. The restaurant does a bang-job with fresh seafood, too, but it’s the tinned seafood lineup that has earned Saltie Girl rapturous local reviews and brought it national media attention.

Not sure your customers would be interested in a list this comprehensive? Another New York City restaurant, Donostia, has a scaled-down approach that might work if you want to test the waters for tinned fish on your clientele before taking the plunge. The restaurant’s conservas menu offers 11 tinned seafood choices, five kinds of preserved vegetables and a couple of combo plates.

Prices are modest, mostly in the high single- or low double-digits.

Similarly, Seattle’s JarrBar goes with a short seven-item tinned seafood list, even offering them at $2 off at happy hour. It serves tins with lemon, Jacobsen sea salt and espelette. Customers can add salsa verde, harissa or romesco sauce for a $2 upgrade.

“Spanish ‘conservas’ are preserved fish, meats and vegetables packed in jars, but more famously in cans. The Spanish view conservas as an art form, choosing only the best quality products from their distinguished regions of origin. In the Barcelona area, bars like Quimet & Quimet and Espinaler base all their tapas on conservas. The best part? High quality conservas actually improve with age in the can!”

Would you feel better about this trend if you knew there was a celebrity chef involved? Good news. Washington, D.C.-based chef Jose Andres is on board. His branded product line includes 10 kinds of tinned seafood from Spain, some of which Andres serves at his restaurants. All are available online, where Galician clams, priced at $64.95 for a 5.3 oz. tin, are the most costly.

So will anyone beyond adventurous foodies jump on the tinned seafood trend? That’s what we’ll find out going forward. But be aware these items are menu fixtures in parts of Europe, to the point where they drive entire concepts.

“In Portugal conservas restaurants—restaurants whose star ingredient comes from a tin can—are as popular as gourmet burger joints in the U.S.,” writes food blogger Dann Woellert. “There are stores in Portugal that sell only tinned fish, and in a kaleidoscope of varieties other than tuna and salmon. Imagine, scallops, oysters, squid packaged in its own ink, and even urchin caviar.”

Let’s hope we see tinned seafood appear on some of the 2017 food trend forecasts set to be released later this fall. If it catches on, almost any operator will be able to offer customers a wide range of trendy seafood options — without worrying about freshness issues or the chef’s cooking ability.