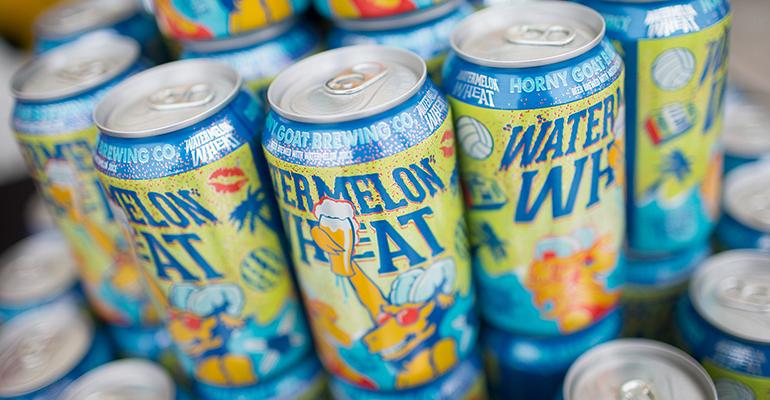 <p>Fruity, spicy and tart/sour beers and brews mixed with juice or tea are in demand these days.</p>
Trends

Last year as many as one in five beer drinkers drank flavored beer. More than half (57 percent) of beer drinkers who upped their consumption in 2015 credit this increase to a wider availability of flavors. Young women (22-34) represent the biggest fan base for flavored varieties. Overall, as many as three in five (58 percent) U.S. alcohol drinkers say they are interested in fruit-flavored beer, with other flavors such as spicy (45 percent); tart/sour (45 percent); and beers blended with juice, tea and soft drinks (49 percent) also showing strong potential.

Leading flavors among new beers include pumpkin, spicy, coffee and chocolate, says Beth Bloom, food and drink analyst at Mintel. “The trend differs from the boom seen in flavored vodka a few years back in that flavored beer launches are exploring more adult formulations and steering clear of gimmicks such as whipped cream, coconut cream pie and Dreamsicle varieties,” she adds.

Mintel also reports that Americans are spending more on beer, but buying less of it.

Valued at an estimated $102.1 billion in 2015, dollar sales of beer are estimated to have grown a moderate 4 percent in 2015, up overall 21 percent since 2010. Meanwhile, volume sales continue to decline, slipping 2 percent in the same five-year period.

Today, beer is the nation’s most popular alcoholic drink with nearly one quarter (24 percent) of U.S. adults saying it is the alcoholic beverage they drink most often. This is significantly higher than any other alcoholic beverage, including wine (16 percent). Men (59 percent) are twice as likely as women (29 percent) to identify themselves as beer drinkers. Beer drinking among Millennials (48 percent) and Hispanics (48 percent) is also well above average.

The craft share of the beer category nearly doubled from 2010-15 (5.2-10.2 percent), with three in 10 (30 percent) beer drinkers consuming “craft-style” beer and one in five (23 percent) drinking “true-craft” beer. More than half of those who are drinking more beer cite better craft choices as a driving force.

Bloom says an engaged consumer base interested in trying new varieties, a savvier group of shoppers interested in where their products come from and how they are made and more premium brands are driving demand for craft beers. "Many craft beer brands lay claims to being local, small batch and handmade, some with a long heritage. Craft beer also benefits from being perceived as a premium version of a relatively affordable alcohol category,” concludes Bloom.