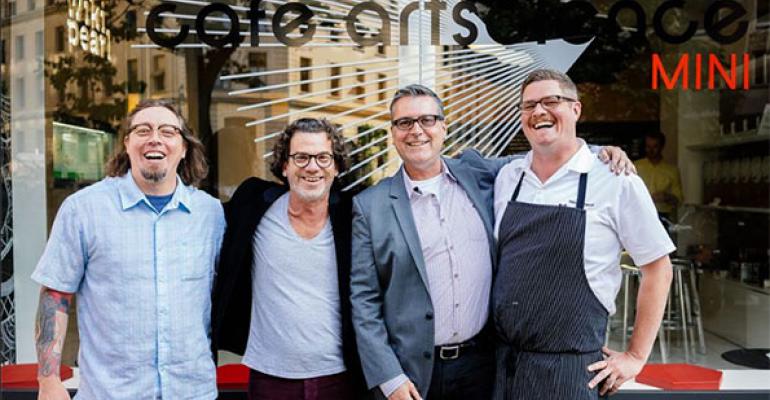 <p>The nerds behind Cafe ArtScience in Cambridge, MA, designed to resemble &quot;an Apple Store of nutrition where one can enter and immediately believe that one is in the future.&rdquo;</p>
Trends

You don’t have to be a genius to open a new restaurant. But what if you were? We’re about to find out thanks to new operations just opened by, respectively, a hypercreative inventor who’s a Harvard professor to boot; a renowned author known for taking challenging new ideas and turning them into best-selling books; and the cofounder of the world’s leading enterprise software company. Each has all of the money, power and fame most people would want, and yet they’ve decided to take a crack at the restaurant business.

Cafe ArtScience opened in Cambridge, MA, late last year. The proprietor is Harvard biomedical engineering professor and serial inventor David Edwards. It’s a big restaurant—120 seats plus 24 more in the bar—with big aspirations. Edwards describes the intended vibe as “kind of an Apple Store of nutrition where one can enter and immediately believe that one is in the future.”

Edwards’s original specialty was developing drug delivery platforms that enable patients to inhale drugs and vaccines in aerosol form. He sold his first company, Advanced Inhalation Research, for $114 million and has started three others since. Among Edward’s inventions for the food world are the Le Whaf carafe and—restaurant marketers take note—the oPhone, a device that enables scent messaging.

These and other bleeding-edge inventions can be seen at work at his restaurant. But they’re not the real focus. Cafe ArtScience is all about the food. It offers a contemporary take on French and American classics with just an occasional high-tech touch thrown in. Edwards was smart enough to bring in solid pros from top Boston restaurants to prepare the food and drinks and, of particular importance, to ensure the level of hospitality was top notch.

Clever as they are, Edwards’s food inventions haven’t yet caught on with the public or even other operators. He hopes people will come to his restaurant to see these devices in action.

Malcolm Gladwell, an owner of the just-reopened White Hart Inn in Salisbury, CT, has a less-ambitious goal for his new place. The New Yorker essayist, lecturer and best-selling author, an area resident, told Conde Nast Traveler that he became involved “mainly so that he would have a place to hang out."

The Inn, which dates to 1800 and was recently renovated, is a lot more than that. It had been shuttered for four years before Gladwell and his fellow investors partnered with well-regarded British chef Anne Wayte to bring it back to life last fall.

Wayte is taking a farm-to-table approach both in the Tap Room Tavern and the weekends-only Dining Room. The New York Times likes her approach. “The White Hart consistently delivers well-made, flavorful food,” its reviewer says.

Gladwell, who writes for the New Yorker and is the author of such best-sellers as The Tipping Point, Outliers, and Blink, is one of the best-paid speakers in America. He commanded up to $80,000 per gig on the business convention circuit at the peak of his popularity. Gladwell says his idea about writing is to “try to come up with simple, sort of catchy ways of capturing complex ideas.”

Few businesses are more complex than that of German enterprise software firm SAP, which has branches in 130 countries. Its cofounder and chairman Hasso Plattner thinks this giant company needs to tap into the vibrant culture of tech innovation if it wants to keep growing. To that end, he and SAP opened HanaHaus in Palo Alto, CA, in March. It’s meant to be a cafe and community workspace where an entrepreneurial-minded clientele will gather to swap innovative ideas while they drink and dine.

HanaHaus is located inside the former Varsity Theater, and much of the 15,000-sq. ft.-space is consumed by open workspaces, meeting rooms and a 100-seat large assembly area. But the centerpiece is the Blue Bottle Cafe, which will provide full cafe service “featuring its world-class coffee and teas, baked goods and freshly prepared meals for breakfast, lunch and dinner.” It’s everything an up-and-coming techie could dream about in a hangout.

"HanaHaus is not just a physical space," says Plattner. "Our goal is to create a sense of community, along with a culture that actively fosters creativity, connection and collaboration. These elements are vital to discovery and the cultivation of new ideas. We believe that you can't replace the energy that comes from bringing people together. HanaHaus is open to everyone and we're eager to see how it evolves as people make it their own."

It’s interesting that a company with this ambition thinks its needs to provide a cafe serving hip food and coffee to make it happen. At least SAP found the right partner: revered coffee purveyor and tech community favorite Blue Bottle. The Oakland, CA-based company operates eight cafes in and around the Bay Area, plus seven more in New York City and a pair in Los Angeles.

With annual sales of $17 billion, SAP isn’t taking much of a financial risk with HanaHaus. Neither is Edwards at his operation; his biomedical device patent income should continue grow even if his food gizmos never catch on. And it’s the same for Gladwell, who can give a single speech and make more money than most restaurant owners take home in a year. Yet other operators can take solace in the fact that while these three geniuses have brains and money, they still feel that the being part of the restaurant industry is a cool thing to do. We agree.