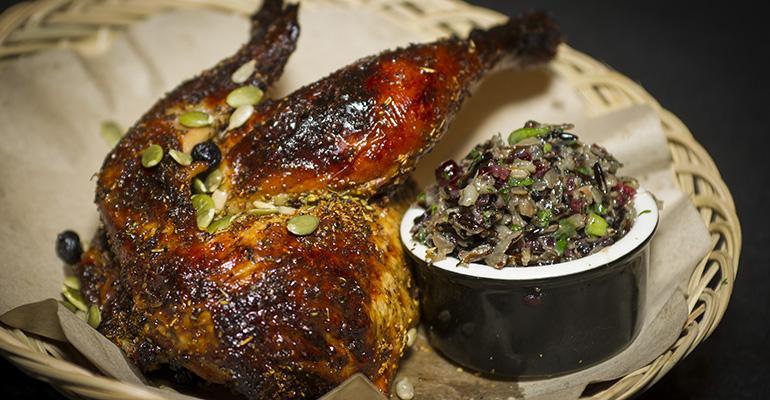 Native American concepts go back to the future

Long before the words “gluten-free,” “dairy-free,” “sustainable,” or “organic” were introduced into our vocabulary, Native Americans were living a sustainable, farm-to-table existence.

Now a growing number of Native American restaurant concepts are introducing consumers to America’s ancestral ingredients in a way that couldn’t be more on trend.

Among them are the fast-casual Tocabe and Werowocomoco Restaurant; the full-service Pueblo Harvest Café; Red Mesa Cuisine; Mitsitam Native Foods Café; and The Sioux Chef catering and Tatanka food truck.

Boris Revilla, food and beverage director at Pueblo Harvest Café in Albuquerque, N.M., believes it was only a matter of time before people became interested in Native foods. “There’s been a huge farm-to-table movement in recent years, and everyone is more health-conscious,” he said. “It’s natural that they’d be interested in the original foragers and farmers of this land — Native people.”

“People really understand about local foods and it just so happens that the food we’re serving is also extremely healthy,” he said. “It’s a great diet because it is super low-glycemic, high-protein, good fats, lots of vegetables, and hyper-local.”

“I base things on four historic periods,” said Frank. “The Pre-Contact Period, which are foods that existed before contact with Europeans, such as what I call the Magic eight — corn, beans, squash, chile, tomato, potato, vanilla and cacao. None of those ingredients existed anywhere outside the Americas in 1491.”

The second period is the First Contact Period, according to Frank, the timing of which varies across North America with the arrival of various settlers.

“With them, the Europeans brought ingredients,” said Frank. “They originally brought domesticated animals, by-products from those animals, wheat, wine, and stone-fruit cuttings , and then citrus, olives, figs, etc., came later.” The Third Period is the Government-Issue Period, she said. It was during this time that the government issued foods after forced relocation.

“The government issued lard, flour, sugar, coffee, and canned meats, including Spam, which got incorporated into the diet,” she said.

“Now we’re in what I think everyone is interested in, which is what we call the New Native,” said Frank. “The New Native is really a reintroduction of the ancestral foods that Native communities can reclaim for health and wellness.”

Native cuisine is really hard to do in a “pure” way because it’s 2017, said Frank.

“The word ‘traditional’ itself can be problematic; I used the word ‘ancestral,’” she said.

But fusion is inevitable, she argued.

“Fusion happens when you encounter someone else that cooks something a certain way,” she said. “It’s a product of cultures colliding and being together.”

In introducing the past to the present, Frank said it’s important to remember that we’re using the knowledge of ancestors and elders who gave great sacrifice so that we could be here.

“These traditions are very sacred,” said Frank. “Food is our medicine; food is sacred; we don’t waste. There’s protocol in how we harvest, and traditions we need to follow to serve these foods. It’s very seasonal and native. It’s okay to offer something and then run out. It’s all about sustainability. It’s the cycle of life.”

At the two-unit Tocabe, based in Denver, sourcing from Native communities is a priority, even over local ingredients, said Ben Jacobs, co-owner of Tocabe, which also operates a food truck. Tocabe was founded eight years ago and a third location is scheduled to open this year. Recently the chain upped the number of indigenous ingredients sourced from Native farms.

“Even if it’s a greater distance away, if we can support another Native business or producer, we do that first and local second,” said Jacobs.

Tocabe is set up in a fast-casual style because people are familiar with it, he said. The concept is a spin off of a similar concept operated by his parents. “We wanted to break that mold of not who we were, but who we are, and where we’re going,” said Jacobs. “You can use pre-colonial food, but it doesn’t have to be presented that way. You can present it in a way that’s very forward thinking.”

Pueblo Harvest also marries tradition with mainstream, using the “three sisters” of corn, squash, and beans, as well as chile, melons, and meats like bison and turkey in familiar dishes to make them more approachable.

“Before, we had a completely traditional approach. Now we take traditional ingredients and incorporate them into more mainstream recipes,” said Revilla. “Since then, our popularity has spiked.”

The Sioux Chef’s Sherman, meanwhile, remains committed to ingredients of pre-Colonial times specific to the region.

“We’ve put ourselves in a box of only using indigenous ingredients, which took some education of our customers,” said Sherman. “We’ve cut out dairy, flour, sugar, beef, pork, chicken; just anything that wasn’t here before the European influence.

“I was nervous when I first started, because not only was I doing something completely different, but even within the indigenous communities, I was going against the grain because I wasn’t going to serve fry bread, which was kind of the go-to piece for Native American food,” he said. “With my research, I wanted to focus on just our area and what the people were utilizing; we wanted people to understand that every area was unique when it came to indigenous food.”

Introducing consumers to key ingredients as opposed to full dishes appears to be the secret to success with the majority of Native restaurants.

“The Blue Corn Onion Rings are definitely one of our most popular appetizers: the dish itself is familiar, but through it we’re also introducing people to blue corn, which we source from Pojoaque Pueblo,” said Revilla. “We’re expanding their tastes a few ingredients at a time. “The Tewa Taco is also one of the most popular items,” Revilla added. “Here again, everyone knows about tacos, but we present them with a Native spin through the fry bread. Many of our entrees change seasonally, but items that include bison are popular. The dish itself may be very approachable — a sandwich, a stew — but the meat introduces customers to traditional Native flavors.”

At Werowocomoco, which is inside the Virginia Dare Winery in Geyersville, Calif., bison and tacos top the list of favorites.

“The shredded bison, fry bread taco, bison burger, and bison ribs and all popular,” said Guadalupe Gonzalez, Werowocomoco’s kitchen manager. “People don’t usually get to have bison ribs, and they like them.”

At The Sioux Chef, Sherman focuses on a lot of staples.

“We have hand-harvested wild rice that we buy directly from tribes around Minnesota; fresh lake fish from the Red Lake Reservation; and we work directly with Native farms for heirloom varietals,” said Sherman. “The only beverage we sell is cedar and maple tea.”

At Mitsitam Native Foods Café inside the National Museum of the American Indian in Washington, D.C., the menu has changed seasonally for 12 years.

Freddie Bitsoie, Mitsitam’s executive chef, said the clam soup is so popular, he’s thinking of making it a permanent menu item. But it has been adapted for today’s consumer preferences.

“Based on evolution, our flavor profiles change; what our tongues want to taste are not things that are ancient,” he said. “We developed a palette for acidity, bitterness, and things that are sweet. So I added a little bit of leeks to the soup for sweetness, and I added a little garlic, thyme and bay leaf. But it’s really nothing that’s overpowering, and it’s very complex.” It is possible—and beneficial—for non-Native chefs to integrate indigenous foods into their menus, according to Revilla.

“It will help them develop a relationship with the land, wherever it is they work,” he said. “This involves researching the Native people of their own regions, how they sourced their food, how they used the resources around them — the nutritious plants and meats that the land provided for them. In the long run this approach is healthier for everyone, including the land itself.”

Jacobs, however, argues that Native Americans should shape the future of New Native dining. “What’s exciting now is that we’re seeing a huge growth in Native cuisine produced by Native people,” said Jacobs. “The biggest fear is when something becomes a trend and people from all different backgrounds begin to latch onto it, which is fine in many ways, but for us, our cuisine is not fully understood yet and not fully defined yet for the general population. So it needs to come from us, as a people, and our communities.”

CORRECTION: This story has been updated to correct a cacao reference in a quote.