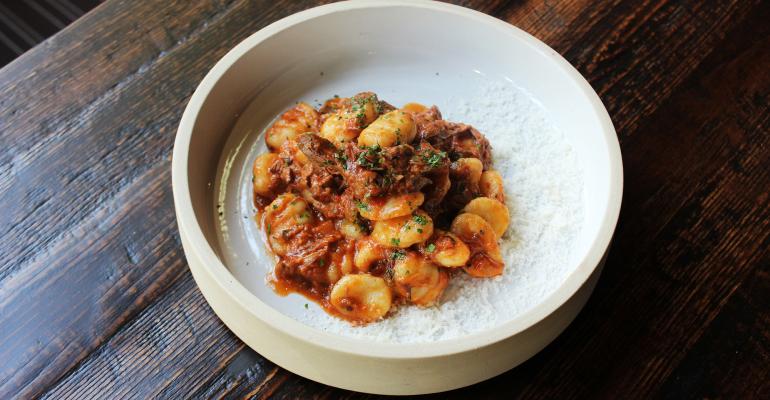 Italian food has long been the most popular “ethnic” cuisine in America, but that doesn’t mean it’s not also trendy.

Of this class of Trending Tables, 13 out of 33 restaurants show strong culinary influences from Italy — that’s 40 percent.

That includes establishments like Vinoteca in Los Angeles, Il Posto in Denver and Trattoria Fanny in Portland, Maine, that are full-tilt Italian, as well as places like Esker Grove in Minneapolis, with Italian accented dishes loup de mer with octopus, watercress, tortellini, lardo, olive and buttermilk, and Rustic Root in San Diego, which serves lobster pappardelle.

In general, restaurants this season are showing a strong inclination toward the Mediterranean, sometimes beyond the usual favorites of Italy, Spain, France and Greece. Bacari GDL in Los Angeles is using Egyptian and Libyan spices, and Tipo in Portland, Maine, while serving Italian-inspired food, is unafraid of North African spice blends such as harissa and za’atar. Meanwhile, at Arroz in Washington, D.C., Mike Isabella is doing his own take on Spanish and Moroccan food with dishes like foie gras parfait with ras el hanout and smoked bone marrow with pan con tomate and oxtail marmalade.

Although the Mediterranean is clearly the dominant influence at most of these Trending Tables, Asian and Latin influences are brought to bear, too. Pajarito in St. Paul, Minn., is all about sophisticated Mexican food (and agave-based cocktails), while the homey food of Pork & Beans in Pittsburgh adds poblano salsa and tomatillo salsa verde to its Frito pie.

Izakaya Minato in Portland, Maine, evokes a Tokyo tavern, while other restaurants are more subtle with their East Asian influence, like the Japanese kewpie mayonnaise and Korean gochujang on the lobster roll at Plan Check Santa Monica, and the char siu roasted pork butt and shishito peppers that accompany the pork chop at Soca in LA.

Plan Check also gives a nod to India with the curried lobster bisque at the heart of its lobster pot pie, and Avelina in Denver gives its pork tenderloin an Indian accent with curried cauliflower and mustard seed caviar.

National Tables: Something for everyone
Apr 18, 2018