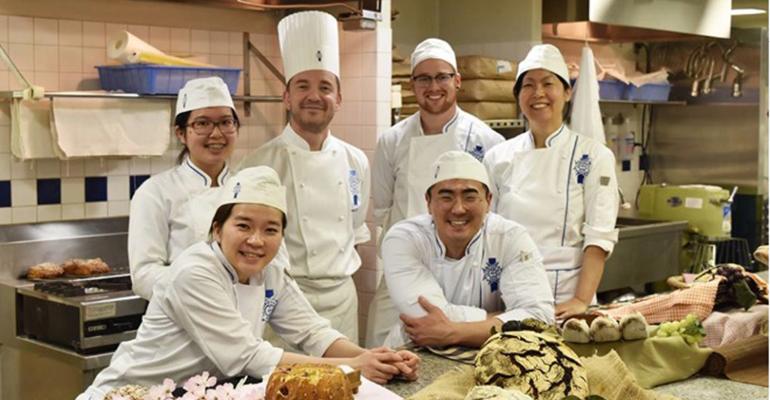 Roundtrip airfare to Tokyo, nine weeks of intensive language and culinary training, a six-month internship at a prestigious restaurant in Japan, free housing: Even network TV cooking competition shows don’t hand out prize packages this generous to their winner. But that’s the opportunity the government of Japan is giving away—and not just one of them, either. It’s offering 15 of these eight-month-long immersive culinary experiences. The start date: July 1, 2016.

Interested? If you’re 18 years or older, can speak English, have an interest in Japanese food and are not currently a resident of Japan, you’re eligible. According to the application form the submission deadline is May 22, 2016.

The formal title of this offer is the Japanese Cuisine Bursary Programme, and cooking school Le Cordon Bleu Japan is its administrator. Backing the project is the Organization for Fostering Human Resources for the Promotion of Japanese Cuisine and Food Culture, which operates under the auspices of the country’s Ministry of Agriculture, Forestry and Fisheries. The idea is that upon completion of this program, participants will be equipped to raise the profile of Japanese food in non-Japanese countries and help increase the use of Japan-sourced product by 30 percent.

Given the rampant popularity of ramen shops, sushi restaurants and izakaya spots in the U.S., it’s hard to believe that the Japanese government sees a need to boost the perception of the country’s food here. But it does, and this program is the chosen vehicle to do it.

The training kicks off with four weeks of Japanese language instruction scheduled for July 1-29. The venue will be the Tokyo International Japanese School. That’s followed by five weeks of culinary training conducted (in English) at Le Cordon Bleu Tokyo from Aug. 1 to Sept. 2.

The six-month restaurant internship component runs from Sept. 5 to the end of February, 2017. Program participants will work at one of 13 restaurants located in either Tokyo or Kyoto. A pair of sushi restaurants, one in Tokyo, the other in Chiba, will also be options. Participants will be able to indicate where they would like to work, but cannot choose a particular restaurant.

The application process looks manageable. The paperwork involves a resume; a 100-200 word “Statement of Motivation” that details why you’re applying and what you hope to do with the skills you acquire; and a 300-500 word mini-essay on what you plan to do when you return to the U.S. and how that might result in the use of more Japanese food products.

Other requirements include an outline of a dispatching entity (i.e., where you work or go to school now); a certificate of employment; and a certificate of reinstatement (will your boss take you back?) and/or proof of education at a culinary school. Which is to say, the sponsors want to know that applicants are bonafide restaurant professionals or c-school students and will have actual restaurant jobs when the program ends.

Other key details: there’s a 1,000-yen allowance per day (roughly $10 U.S.) and Le Cordon Bleu Japan will arrange for the necessary visa.

We’ve written stories about other contests over the past year, each of which would do wonders to move a person’s career or concept forward. The list includes:

Each was generous and valuable in its own way. But with 15 winners, the Japanese Cuisine Bursary Programme looks like a standout opportunity. Those chosen will get immersed in a culinary specialty in a hurry.