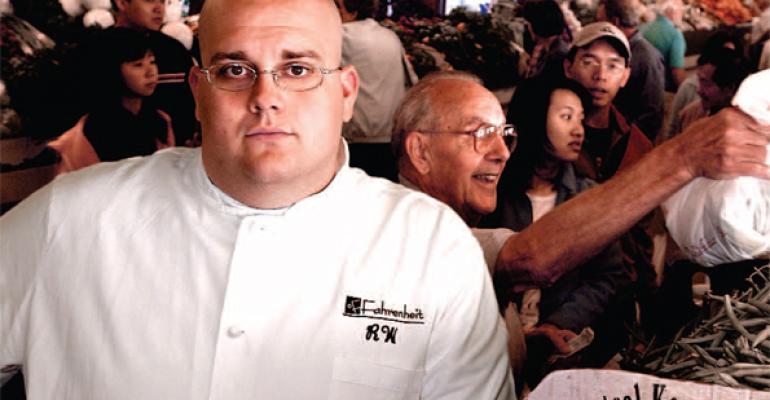 While most of his friends were partying like rock stars, Rocco Whalen was getting busy. After graduating from culinary school, and while barely out of his teens, he left his hometown of Cleveland to continue his education with professor Wolfgang Puck. Rocco earned his higher degree in the trenches of ObaChine in Phoenix, Granita in Malibu and Spago in Las Vegas. With lessons learned, he moved back home and, at age 25, opened Fahrenheit, a 125-seat restaurant that generated heat the moment Rocco began cooking. Gourmet immediately listed Fahrenheit in its Guide to America's Best Restaurants. "Chef Rocco Whalen knows how to coax big, vital flavors from fresh materials," it wrote. His contemporary American menu is like a TripTik through the kitchens of Puckville, which explains the Californian, Asian and Mediterranean influences. Last year, with Fahrenheit busting at the seams, Rocco,and his partners— sisters Kelly and Kim Repas—took over the space next door, adding 50 more seats. The 27-year-old's vibrant restaurant and mature cooking style have caught the eye of Esquire's John Mariani, who put Rocco on his list of "Chefs to Keep Your Eye On." Serious, hard work, it seems, can make you a star.