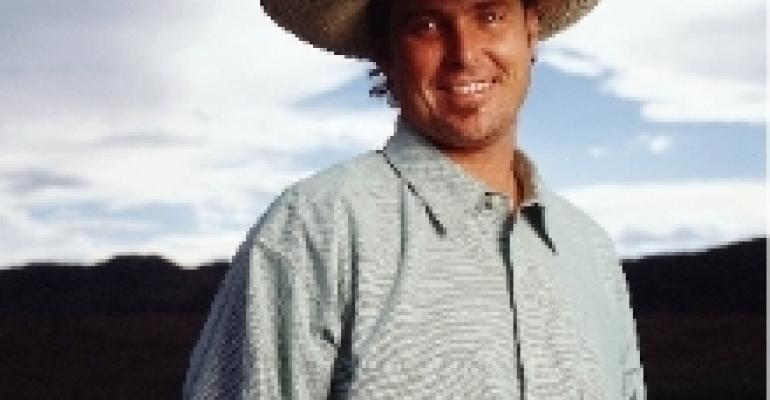 Age: 30. Why he's rising: This ranch-trained chef prepares simple, flavorful food in the tradition of chuckwagon cooking gone upscale. The restaurant is named for the ranch in Edna Ferber's book, Giant, (also made into an Academy Award-winning film in the 1950s). What Spears creates is Texas-on-a-plate, combining cowboy culture with the ingredients and flavors of the Southwest. Background: Talk about having a steak in one's future, Grady Spears worked his way up from cattleman to chef. He paid his dues working as a cowboy in the stock-yards near Ft. Worth and today is head chef at Reata downtown (as well as at the first Reata in Alpine, Texas). In between, he attended college on an agricultural scholarship, and worked as a busboy, waiter and manager in several restaurants. Eventually, he ended up as restaurant manager at The Gage Hotel in Marathon, Texas. When the cook quit, Grady Spears stepped into the kitchen and the rest is history. Cooking style: Cowboy Cuisine. "We change our menus five times a year, and it's definitely Texas food. Texas food, without losing the integrity," he says. Signature Dishes: Bock-Battered Quail, plus specialties such as cabrito ribs, venison ribs, chicken chili rellenos, apple crisp and cajeta made with goat's milk, dessert tostadas and buttermilk pie. Mentors: His cookbook is titled A Cowboy in the Kitchen, (1999, Ten Speed Press) and he's not kidding. The ranch-trained Spears identifies his mentors: "The chuckwagon cooks like Guy Lee, Tom Glasscock and Cliff Teinert, cooks who, out in West Texas 8 years ago, taught me." What the critics say: "No adornment could improve Reata's exemplary ribeye steak, which the menu warns is well-marbled (praise be!)."—Jane and Michael Stern, Gourmet. "Like cabrito [kid goat], just about everything on Reata's menu sounds like something an old cowhand might cook up if he'd been lucky enough to possess Spear's creative streak and network of purveyors."—National Geographic Traveler. What the future holds: There's a Beverly Hills Reata restaurant opening in July on Rodeo Drive, and more cookbooks on the way.