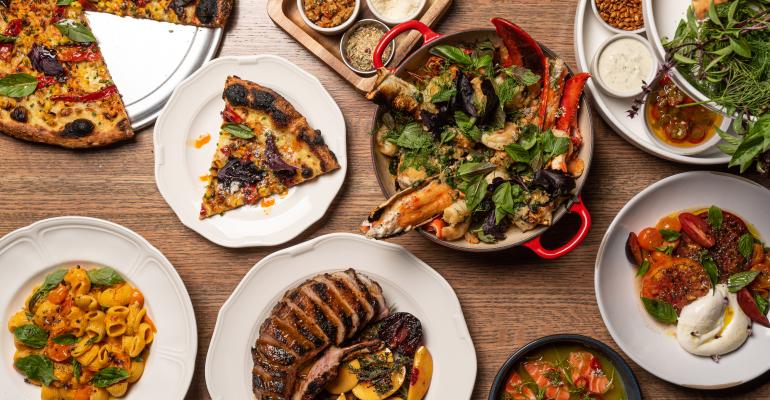 Chicago-based group has concepts as far as California, and is expanding to Florida

What If Syndicate lives up to its name, which was fostered when the partners first sat down and considered “What if…?”

The Chicago-based hospitality group, which first debuted with Maple & Ash in Chicago in 2015, made strides during the pandemic by developing large-scale concepts that include Celestina Rooftop, Etta, Maple & Ash, Monarch and Kessaku in cities ranging from Scottsdale, Ariz., to Culver City, Calif., and Dallas.

“Two things that happened during COVID. First, we were fortunate to kind of step in when everybody was running,” said David Pisor, managing partner of What If Syndicate. “We signed deals with developers when the market was upside down.”

What If Syndicate’s openings pending in 2022 include five Etta locations — in Scottsdale, Houston, Dallas, Miami and Fort Lauderdale, Fla., and one Maple & Ash in Miami. In 2023, the company’s pipeline includes Maple & Ash locations in Beverly Hills, Calif., and Dallas and an Etta in West Hollywood, Calif.

Secondly, Pisor said, many independents did not survive the pandemic’s economic impact, shaving competition for distinctive dining venues. As consumers enter the vaccine era, they are unleashing pent-up demand for dining experiences, he said, noting that Chicago-area restaurants anecdotally are seeing demand up 130% over pre-COVID numbers.

The company has deep roots in hospitality. Pisor is a real estate developer who worked at Chez Panisse in Berkley, Calif., for seven years with his aunt, farm-to-table pioneer chef Alice Waters.

“I ended up in the back [of house], but I didn’t get much further than carrots,” Pisor recalled of his Chez Panisse years. “And then I worked in the front of the house as a waiter.”

Pisor said Waters was a hospitality mentor for him. “She just taught me to understand quality at a level I didn't ever know before,” he said.

He went on to develop the Elysian Hotel and Residences in Chicago, which was sold to Hilton, and then to work with designer Tommy Hilfiger on The Raleigh Hotel in Miami.

What If Syndicate was created with Maple & Ash and expanded to the other four concepts, all of which are designed to offer top-notch food, service and experience as well as provide boutique hotels distinctive offerings with great hospitality talent, Pisor said.

“Because of the closures of restaurants,” he said, “I think there's demand for new product. I think we're going to benefit from that.”

What If Syndicate works with hotel developers, and Pisor sees the attitude toward food and beverage at boutique hotels becoming much more sophisticated in the past decade.

“A lot of hotels are realizing how valuable restaurants are,” he said. “I think that the pendulum is swung back toward great restaurant operators to make hotel restaurants an attraction.”

As a developer, Pisor also said restaurants need to have access to credit and provide a larger-scale space, both of which are difficult for many independent operators. To make for a profitable dining space, he added, the restaurant needs to seat 220 at minimum.

What If Syndicate is working some other hotel deals. “We’re looking internationally,” Pisor said. “I'm very excited to work in other countries.”