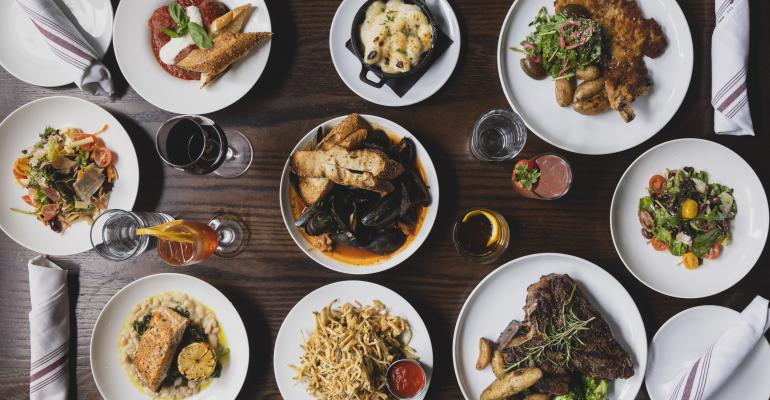 "We began focusing a lot more on food, just because nightlife, which was our bread and butter, was kind of irrelevant at that point,” said Gibbons.
Trends>Top Multi-Concept Companies

What began as a nightclub venture has, in 16 months, morphed into a bona fide restaurant group thanks to the pandemic. It encompasses soon-to-be 14 restaurants in its portfolio throughout Philadelphia, mainly in the Northern Liberties neighborhood.

Founded by partners Tim Lu and Derek Gibbons, Glu Hospitality opened its second nightclub — Leda and the Swan — in February 2020, right before the world, and Glu Hospitality, changed forever.

“We began focusing a lot more on food, just because nightlife, which was our bread and butter, was kind of irrelevant at that point,” said Gibbons on the group’s switch to traditional restaurants.

During that 16-month span, Glu Hospitality went from four concepts to 13 with one more opening before the end of 2021.

“We had a shift in our mindset, and our vision was, what is sustainable and what is something that is recession proof?” said Gibbons. That’s how the restaurant group started its first ghost kitchens that became brick-and-mortar restaurants last month.

The latest restaurants from Glu Hospitality — Figo Restaurante and Figo Pizzeria, which opened in mid-October — are brick-and-mortar units of one of the group’s ghost-kitchen concepts. Those are run out of the oversized kitchens at Germantown Garden and Vesper Dayclub — full-service nightlife concepts that were closed during the pandemic.

Glu knew the concept would work for Figo Pizzeria after opening its first fast-casual concept, Bagel & Co., in April of this year. The group already has plans to open several more units of Bagel & Co. over the next few years.

Many of the group’s restaurants are in the Northern Liberties section of Philadelphia, a formerly downtrodden neighborhood for artists that has been developed and now has some of the highest incomes in the city of Brotherly Love.

The group is now transitioning to another trendy neighborhood, Fishtown, for its latest restaurant Izakaya by Yanaga, which opened in September.

Despite investing in some fast-casual concepts, Glu isn’t giving up on its nightlife roots.

“We're not trying to go after a Michelin star, although that would be wonderful. We're more about creating this fun, energetic atmosphere,” said Gibbons.

Though there are no plans to open another nightclub for the group, Gibbons and Lu are grateful for their beginnings and say it’s helped them learn marketing — one of the reasons the group was successful during the pandemic.

Glu has opened nine restaurants during the pandemic, and Lu and Gibbons used their experience marketing events with a week’s notice.

“There's a formula to it. Get hype around a certain event or a certain night,” said Gibbons. “It’s just kind of second nature to get things out and have that urgency to get them out, because with nightclubs, you're not necessarily marketing for the week; you're always marketing the next day.”

Another marketing tip from Gibbons that the group implements in all of its restaurants is a selfie wall, something social-media friendly that will encourage people to post on Instagram and drum up publicity organically.

“That's what drives people to maybe want to try your space over someone else's because they're going to capture a cool picture,” said Gibbons.