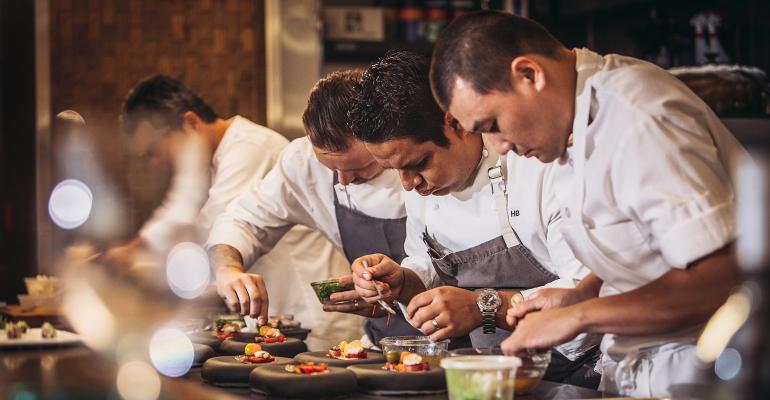 Wolfgang Puck is one of the best-known names in American fine dining.

What’s new: Test kitchen Rogue opened in April. A seventh unit of Cut is scheduled for the Mondrian Hotel in Doha. Various casual concepts are also planned in 2018, in airports around the world.

Wolfgang Puck is one of the best-known names in American fine dining.

He was one of the nation’s first celebrity chefs, and he helped put California cuisine on the culinary map. This year, Puck was honored with a star on the Hollywood Walk of Fame.

It has been 35 years since Puck opened Spago, first in West Hollywood, Calif., and later moving to Beverly Hills. Redesigned in 2012, Spago remains a cornerstone of the Los Angeles dining scene. Earlier this year, Puck opened Rogue, a test kitchen at the company’s headquarters in West Hollywood, offering a tasting menu for only eight people each night. The concept is meant to be a collaboration with the group’s chefs, with chef-in-residence Alan Latourelle at the helm.

Meanwhile, the high-end steakhouse Cut continues as a growth vehicle within the fine-dining group, with a seventh location scheduled to open at the Mondrian Hotel in Doha later this year.

The group is also planning new casual concepts for airports.

Expect more from Puck, who remains actively involved, but who has also built a deep bench of managing partners and chefs to take the company into the future.