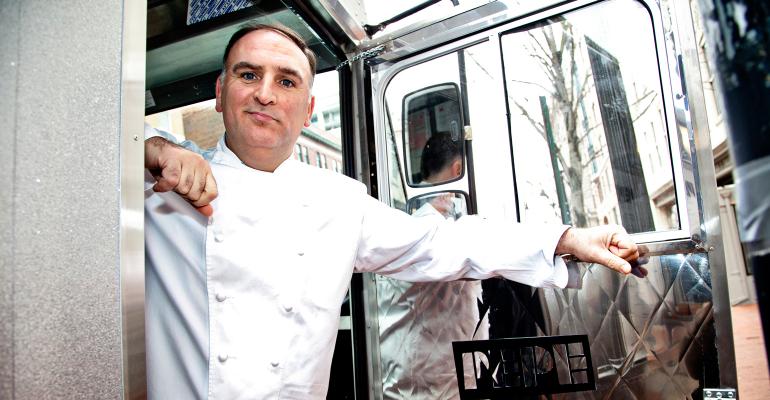 José Andrés could be described as a force of nature.

What’s new: In late 2017, Somni in Los Angeles and a test kitchen called ThinkFoodLab in Washington, D.C. Coming in 2018 is Fish by José Andrés in the Bahamas; Jaleo at Disney Springs in Lake Buena Vista, Fla.; Zaytinya in Dallas; and a Spanish food hall in New York’s Hudson Yards development.

A growing portfolio; a diverse playbook

José Andrés could be described as a force of nature.

He has only been in the U.S. since 1990, and he’s won James Beard Awards and two Michelin stars. He has been named one of Time magazine’s Most Influential People. He has written books, taught college courses and appeared on TV many times.

Andrés has also made an effort to solve the nation’s problems with hunger and poverty. He has been a vocal advocate for immigrants. And he has tussled in court and on Twitter with President Donald Trump. A sandwich at the ThinkFoodLab test kitchen

For his ThinkFoodGroup, that energy has resulted in a growing portfolio with a diverse playbook.

There are signature restaurants like minibar by José Andrés, winner of two Michelin stars, exemplifying Andrés’ playful choreography of art and science.

There are destination concepts within hotels. The group has a partnership with Sbe, parent to the SLS, Mondrian and Delano properties, which has resulted in concepts like The Bazaar in Beverly Hills at the SLS.

Sister restaurant Saam at the SLS Beverly Hills closed in July for a redo. Later this year, it will re-open as Somni, a new concept yet to be described.

Next year, the seafood restaurant Fish by José Andrés is scheduled to open at The Cove at Atlantis Resort on Paradise Island in the Bahamas.

A sixth location of Jaleo will open at the Disney Springs complex in the Walt Disney World Resort in Lake Buena Vista, Fla., serving up tapas, wood-fired paellas and jamón ibérico de bellota, and chili and pollo croquetas. The restaurant will also have a grab-and-go component with Spanish sandwiches called bocatas.

And the group is bringing the Mediterranean concept Zaytinya to Dallas in partnership with Turkish company d.ream, or Dogus Restaurant Entertainment and Management, in The Star development there. A rendering of Fish at The Cove in the Bahamas

But perhaps most exciting is the Spanish food hall the group is planning in New York in partnership with Ferran and Albert Adrià, known for their now-defunct restaurant elBulli. It will be a first U.S. effort for the Adrià brothers.

The food hall is coming to the 28-acre Hudson Yards complex in Manhattan and will include 35,000 square feet of indoor/outdoor space, including a market and dining outlets with everything from tapas, ham and olives, to paella.

Meanwhile, back in D.C., ThinkFoodGroup will look to the future with ThinkFoodLab, an outlet that will host a series of pop-ups to test concepts and dishes, with a focus on fast casual.

First up is a version of Pepe, the company’s food truck, which serves menu items like Pan de Cristal sandwiches on traditional light-and-crispy bread; Spanish takes on grilled cheese; and desserts like leche merengada soft serve.

“I always have so many ideas for new concepts going through my head, and it has been a dream of my team and mine to have a space to try them all out in a way that the public can experience,” Andrés said. “With Pepe, we will be looking at how we can push the experience beyond the boundaries of a truck, and from there, we will see what new concepts we can bring to life.”