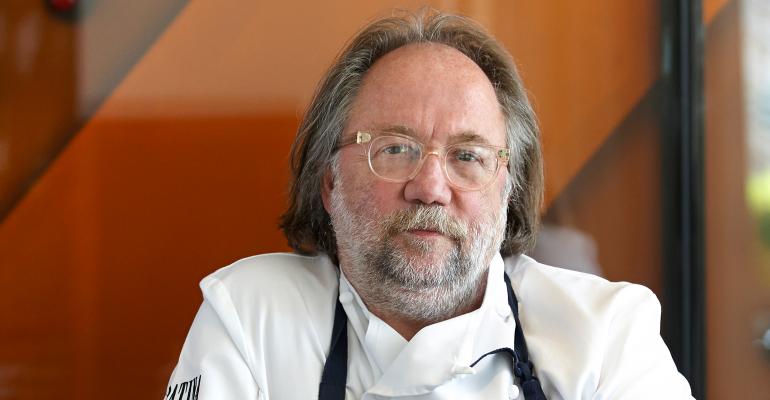 Patina Restaurant Group is known for its attention-grabbing restaurants in landmark locations.

Concepts: Nearly 60 restaurants across the U.S. and in Japan, including the flagship Patina in Los Angeles, and New York venues Lincoln Ristorante, The Grand Tier Restaurant at the Metropolitan Opera House and Nick & Stef’s Steakhouse on both coasts

What’s new: The Edison at Disney Springs in Lake Buena Vista, Fla., and the space-themed restaurant adjacent to the upcoming Mission: Space at Epcot

Patina Restaurant Group is known for its attention-grabbing restaurants in landmark locations. So it makes sense that its next concept will be in space.

PRG’s restaurant for Disney’s upcoming Epcot exhibit called “Mission: Space” will give the appearance of dining high above the earth.

PRG has deep roots with Disney. The out-of-this-world restaurant will be one of several venues the group operates at Walt Disney World, including Tutto Italia, Via Napoli and Morimoto Asia.

The group grew out of foodservice contractor Restaurant Associates. In 1989, chef Joachim Splichal opened the restaurant Patina later expanding with more concepts and a catering empire that fed Hollywood stars at glamorous events.

In 1993, Nick Valenti was named CEO of Restaurant Associates, striking a deal with Compass Group USA, and in 1999 merging with Patina Group on the West Coast, forming the bi-coastal Patina Restaurant Group. In 2014, Delaware North took a majority stake in the company, adding to the list of venues served.

Over the years, PRG has proven its flexibility, creating high-end concepts like Leatherby’s Café Rouge at the Segerstrom Center for the Arts in Costa Mesa, Calif., and Lincoln Ristorante at New York’s Lincoln Center.

In addition to the space-themed concept, PRG will open a version of The Edison at Disney Springs in Florida, a steampunk “industrial gothic” concept inspired by a venue of the same name in Los Angeles. Both are designed by Andrew Meieran of design firm Kinetescape.

Back on the West Coast, the Los Angeles County Museum of Art will break ground in 2018 on a $600 million rebuild that will reshape its neighborhood.

PRG currently handles foodservice at LACMA, including the casual-dining Ray’s and Stark Bar, LACMA Café, and the quick-service Coffee and Milk, or C+M. Whether the partnership will continue remains to be seen, but PRG is likely brewing potential ideas for LA’s future.