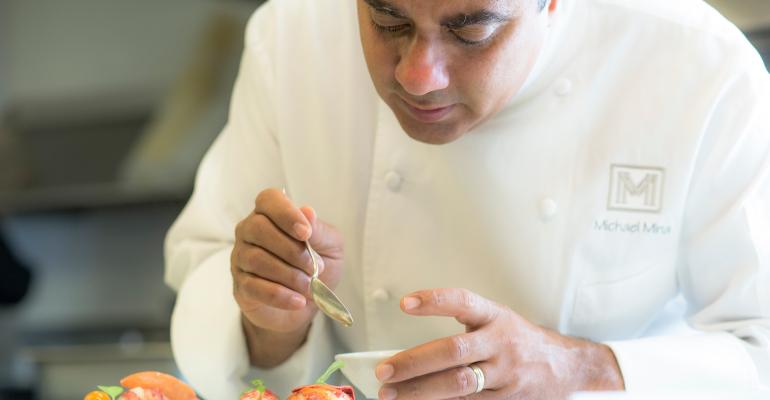 Born in Egypt and raised in the Pacific Northwest, Michael Mina is a Culinary Institute of America alum who spent his early years in the kitchen at Charlie Palmer’s Aureole in New York.

Born in Egypt and raised in the Pacific Northwest, Michael Mina is a Culinary Institute of America alum who spent his early years in the kitchen at Charlie Palmer’s Aureole in New York.

Early on, he was offered a chance to develop a seafood concept in San Francisco with former Bel Air Hotel chef George Morrone. That became Aqua, which put Mina in the national spotlight.

With tennis champion Andre Agassi as a partner, Mina founded his own restaurant group in 2002, later converting a former Aqua location into the Michelin-starred Michael Mina restaurant. Since then, the group has grown rapidly.

This year, Mina Group opened a food hall called The Street: A Michael Mina Social House in Honolulu, with a similar outlet planned for Los Angeles’ Beverly Center in 2018.

From that collection came International Smoke, a concept created in partnership with cookbook author and media personality Ayesha Curry, which will replace RN74 in San Francisco later this year, as well as the fast-casual The Ramen Bar concept with Ken Tominaga, chef and owner of Hana Japanese Restaurant in San Francisco.

In August, the group was scheduled to open Mi Almita, a Mexican restaurant in partnership with Houston chef Hugo Ortega, in the group’s 1,600-square-foot test kitchen.

And in November, even before the food hall, Mina Group plans to open Cal Mare at the Beverly Center in Los Angeles.

With both food halls and standalone locations, Mina Group is building opportunities for its own stable of chefs to grow, as well as bringing in fresh blood with such partnerships.