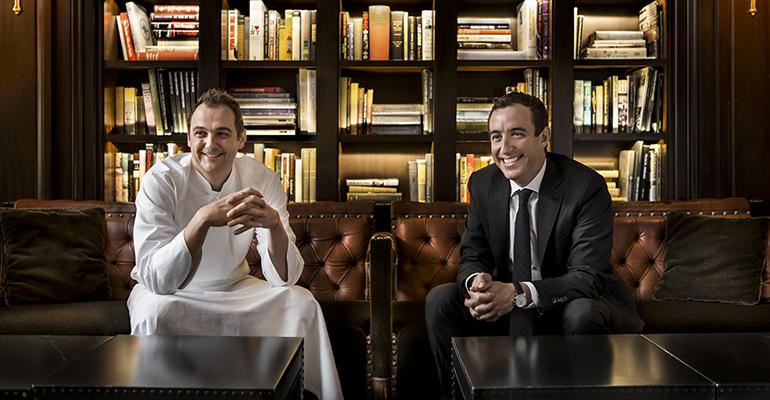 Make It Nice is a relatively young multiconcept group, but co-owners Daniel Humm and Will Guidara have been making their mark on New York’s fine-dining scene for 11 years.

Will Guidara, restaurateur and co-owner

Concepts: Eleven Madison Park, The NoMad and Made Nice

Make It Nice is a relatively young multiconcept group, but co-owners Daniel Humm and Will Guidara have been making their mark on New York’s fine-dining scene for 11 years.

In 2006, the pair joined Eleven Madison Park, which then belonged to Union Square Hospitality Group. Eleven Madison Park debuted in 1998 and was a crown jewel in Danny Meyer’s group. With Humm as chef and Guidara as general manager, the restaurant earned three Michelin stars.

In 2011, the partners took ownership of Eleven Madison Park, but they remain close to Meyer.

The following year, they opened the grandiose NoMad restaurant in a hotel by the same name, inspired by the rock band The Rolling Stones. The hotel and restaurant are scheduled to open a Los Angeles branch this year, and Humm and Guidara have been priming the branding pump with visits by a NoMad food truck there.

This year has been a time of transition for Humm and Guidara.

On the menu are dishes like smoked salmon over frisée salad with soft-boiled egg, dill-caper relish and potato croutons in a cucumber, radish and buttermilk vinaigrette; and seared cod in a chickpea puree with braised fennel, tomato, olives and crispy chickpeas, each priced at $15. Half of a roasted chicken with lemon-parmesan stuffing, herb frites and pickled vegetable salad is priced at $22 on weeknight evenings and Saturdays.

Wine and beer are on tap, and customers can order milk soft-serve ice cream topped with buckwheat honey for dessert.

Eleven Madison Park also closed this year for a complete renovation and redesign.

But rather than leaving staff idle, the partners took the entire team to East Hampton, N.Y., for the summer, where they opened the temporary EMP Summer House.

In an unusual move, the group also held a sort of garage sale for décor from the old Eleven Madison Park, selling everything from brass railings and plates to sauteuse pans online.

In addition to the new and improved Eleven Madison Park, there’s more to come.

Make It Nice is also planning a 7,000-square-foot casual restaurant next year at the 16-acre property overlooking the Oculus, the World Trade Center’s transportation and shopping hub in New York.

In 2019, another new concept is planned for 425 Park Avenue in New York, although details have not been revealed.