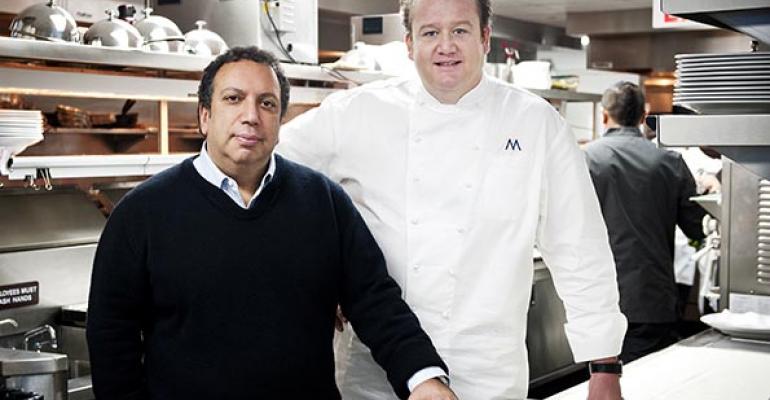 This is part of Restaurant Hospitality&#39;s special coverage of the 2015 MUFSO conference, taking place Sept. 20&ndash;22 at the Hyatt Regency at Reunion Tower in Dallas. Follow coverage of the event on Restaurant-Hospitality.com and tweet with us using #MUFSO. Stay connected on the go by downloading the MUFSO app.

Michael White and Ahmass Fakahany, the driving forces behind Altamarea Group, picked up the Richard Melman Innovator of the Year Award Monday during the MUFSO Conference in Dallas.

White landed his first job out of culinary school at Chicago’s famed Spiaggia, where he earned a four-star review from the Chicago Tribune. His love for Italian cuisine was cemented in Italy during a seven-year culinary exploration of the country. That journey ultimately led him to New York, where his outstanding cooking at Fiamma Osteria brought him to the attention of Manhattan’s culinary elite. Eventually, that job led to the creation of several other restaurant concepts and the formation of Altamarea Group.

Altamarea CEO Fakahany was a former president and COO of Merrill Lynch & Co. He would often entertain Merrill clients at Fiamma. It’s there he met White and the two became fast friends. In early 2008, Fakahany resigned from Merrill to use his considerable financial skills to help White create and build Altamarea Group.

Today, Altamarea Group is a $50 million-plus company with more than 15 restaurants that extend to London, Istanbul and Hong Kong. Together, the portfolio has collected an unheard-of 11 Michelin stars. The company’s exceptional portfolio earned it a place on Restaurant Hospitality’s 2014 list of the Coolest Multi-Concept Companies in the Land.

One of the key developments affecting groups like Altamarea, which runs restaurants skewing toward the high end, is the casualization of dining. In response, the group’s locations have embraced more diversity on menus to accommodate a variety tastes and budgets.

Traditionally, White said, “chefs focus very much on making food that they want to eat; there are those chef-type items but we are also very cognizant that we are cooking for the palates of today—so there is a broad….spectrum of food.”

“We have done four-star restaurants,” Melman said, “I don’t think I want to do any in the future. Volume is a big cure-all for a lot of things.”

White and Fakahany continue to roll out new concepts, including the most recent, a stylish French brasserie called Vaucluse, but have not focused on duplicating one. That may be changing with a planned third location of a casual pizza concept, Nicoletta.

“Everybody likes pizza,” White said, but he added that the challenge in expanding is that everybody craves the pizza of their youth.

Over the last 15 years, the Richard Melman Award has honored some of the best restaurant operators in the country, including Danny Meyer, Jose Andres and Steve Ells.

In our opinion, “nobody plays the concept creation better than Rich,” Sanson said.

The MUFSO Premier sponsor is The Coca Cola Company.

Presenting sponsors are: Dinova, Fishbowl, The Beef Checkoff and The Coca Cola Company

Keynotes/general sessions are presented by: Avocados from Mexico, e*Restaurant from Altametrics and the Texas Restaurant Association.

The Monday night awards reception and awards presentation are sponsored by: Avocados from Mexico.

Hot Concept/Best Concepts Celebration is sponsored by e*Restaurant from Altametrics.

Welcome Package is sponsored by Whirley-DrinkWorks!