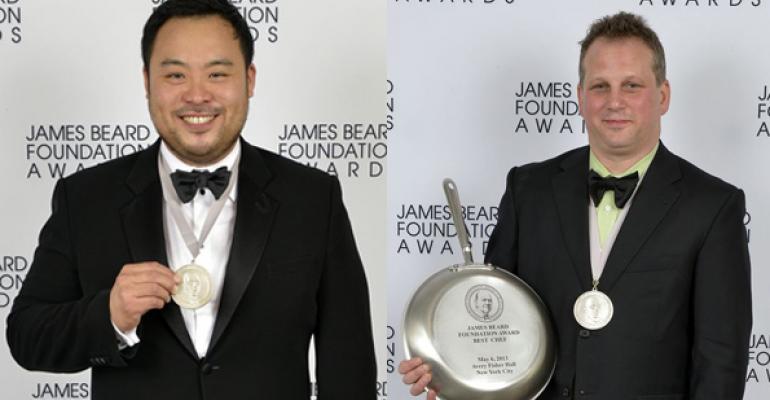 What a week for David Chang. After placing three of his restaurants in the top 100 of the S. Pellegrino World’s Best list, the chef and founder of Momofuku Noodle Bar added the icing on the cake last night after being honored as one of the nation’s two most outstanding chefs by the James Beard Foundation. Chicago’s Paul Kahan and Chang were jointly honored, becoming only the third pair to tie for the top award.

The outstanding chef title was last shared in 1998 when Wolfgang Puck and Jean-Georges Vongerichten were honored. Those two chefs have only added to their ledgers since the recognition, and Kahan and Chang are poised to do the same. Chang, only 36, already has 10 restaurants in New York, Toronto and Sydney, Australia, and Milk Bar, a New York City bakery. Kahan, the executive chef behind Chicago restaurants Blackbird, The Publican, Avec, Publican Quality Meats and Big Star, was previously nominated for the same honor in 2007, and again last year, when both he and Chang were finalists.

Kahan has been winning awards and a national following since his first restaurant, Blackbird, opened in 1999, while Chang has done the same in Manhattan since Noodle Bar debuted in 2004. A week ago, Chang missed making the S. Pellegrino The World’s 50 Best Restaurants list, but he landed three in the top 100: Momofuku Ssam Bar in New York City (No. 86), Momofuku Seiobo in Sydney (No. 89) and Momofuku Ko in New York City (No. 93). If there was any doubt Chang was this country’s hottest chef, it was put to rest last night.

Blue Hill at Stone Barns in Westchester, NY, was named the outstanding restaurant in the U.S. by the James Beard Foundation, a week after ranking 63rd in the World’s Best Restaurants list. State Bird Provisions in San Francisco was named the best new restaurant and Maguy Le Coze of Le Bernardin in New York City was named outstanding restaurateur. Danny Bowien of Mission Chinese Food in San Francisco and New York City was rising star chef of the year.