Andy Ricker pays tribute to the cooks of Thailand 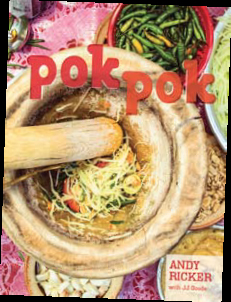 Chef/owner Andy Ricker has fostered an appreciation for Thai cuisine with his six restaurants—Pok Pok, Whiskey Soda Lounge  Pok Pok Noi and Sen Yai in Portland, OR, and  Pok Pok Ny and Whiskey Soda Lounge Ny in New York City—and now delves deeper into the subject with a 304-page cookbook inspired by his travel and cooking experiences. In 2011 Ricker earned a James Beard Award for Best Chef Northwest, and now divides his time among Chiang Mai, Thailand; New York City and Portland.

Pok Pok interweaves Ricker’s travel and food stories with 70 recipes from Thailand, his Asian travels and his restaurants.  After years of personal research, the book blends his discoveries about Thai food and culture with tips, pantry staples, ingredient sourcing and more. As he writes in the book’s introduction, “ I am not a trained scholar of Thai food or culture. My knowledge is largely anecdotal, gleaned from twenty years of observing, eating, cooking, wandering and wondering.”

Readers reap the benefits of Ricker’s curiosity, with the resulting recipes that range from Northern Thai curry noodle soup with chicken to Central Thai-style papaya salad. Also included are Ricker’s tweaks on tradition, such as the recipe for Broken Crepe with Mussels. Traditionally made with oysters in Thailand, his version features Prince Edward Island mussels.

Ricker includes dishes he has encountered elsewhere in his Asian travels, including Vietnamese Turmeric-Marinated Catfish with Noodles and Herbs, a dish served at Pok Pok. He also shares the recipe and story of a Pok Pok menu favorite: Ike’s Vietnamese Fish-Sauce Wings.

“I’ve spent the better part of the last twenty years roaming around Thailand, trying to figure out how to produce Thai Food,” Ricker writes. “To me, that’s what Pok Pok is all about. Yet, the most popular item at Pok Pok isn’t even Thai. I get a kick out of the irony.”