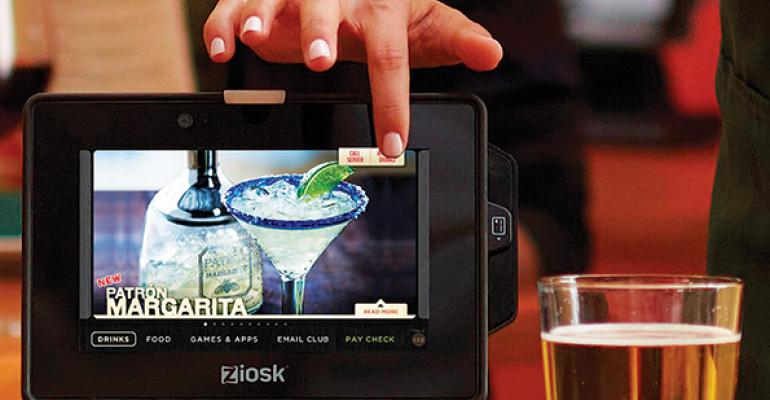 <p>Physically placing a finger on a touchscreen image simulates the act of reaching and grabbing the desired item.</p>
Operations>Technology

Yes, the authors of a new study that examines touchscreen ordering sound a little full of themselves when they claim “our results have rich theoretical and managerial implications.” But if they’re right, restaurant operators will be able to upsell like never before by carefully controlling the images customers see when using a touchscreen device.

The 53-page study, “Computer Interfaces and the ‘Direct-Touch’ Effect: Can iPads Increase the Choice of Hedonic Food?’ is scheduled to be published in an upcoming edition of the Journal of Marketing Research (see the prepublication version).

Don’t be put off by the term “hedonic food.” The concept refers to food eaten for pleasure rather than to satisfy a biological need. It applies to items people know they shouldn’t eat, but go ahead and order anyway. If you run a restaurant, you’re primarily in the hedonic food business.

So does the introduction of touchscreen ordering make any difference in how much hedonic food restaurant customers might order? The authors suggest it does. Their top-line findings:

For example, when study subjects were shown side-by-side images of a slice of cheesecake or a more healthful fruit cup on an iPad, 95 percent chose cheesecake. Just 73 percent of desktop users made the same choice. The authors tested their hypothesis multiple other ways and saw similar results.

The reason why this works isn’t exactly clear. But the study suggests that physically placing a finger on a touchscreen image somehow simulates the act of reaching and grabbing the desired item.

Seem far-fetched? Real-world experience seems to support the authors’ theory. Quick-service chains like Sonic and full-service casual operators like Chili’s report higher check averages since installing customer-facing touchscreen devices. Neither chain uses an iPad-based system, but the results speak to the power of the touchscreen approach.

“Our results have implications for health-conscious consumers, managers, and public policy officials,” the researchers say. They do, but restaurant operators don’t necessarily want to sell unhealthful food. They do want to sell as much food as possible, particularly those items that deliver the highest revenue and margins. This study’s big takeaway is that putting a touchscreen device in the hands of the consumer and presenting menu options in certain ways can make that happen.