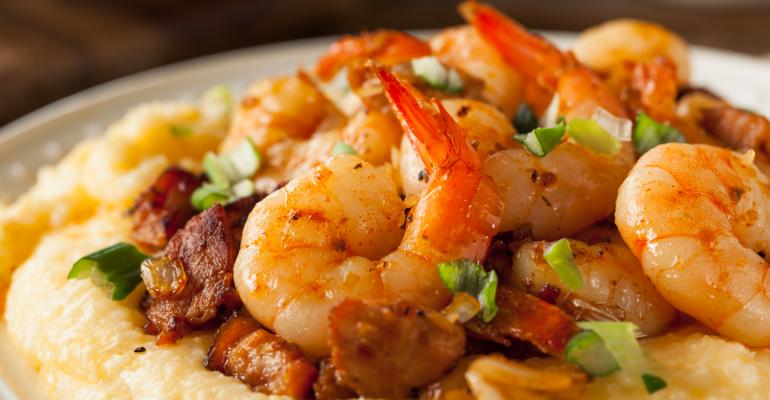 Chefs, restaurateurs explore the regional foods and flavors of the South.

Southern cooking, in all its unpretentious, lip-smacking glory, is arguably the ultimate comfort food. It’s always held a firm grip on menus in the South, but now its many distinctive dishes and flavors are turning up in restaurants across the country, from quick service to fine dining, in classic form and contemporary interpretations.

A case in point is Holler & Dash, a new fast-casual chain from the Cracker Barrel Old Country Store organization. Culinary director Brandon Frohne built a menu around biscuit sandwiches and bowls — the former constructed atop half a biscuit and a bed of kale — with far-reaching Southern roots. The menu also features three variations on fried chicken sandwiches — hot style with cheddar and pickles; with goat cheese, green onion and spicy/sweet pepper jelly; and with pimento cheese and jalapeño sorghum.

Other Holler & Dash Southern-accented selections include a club sandwich with fried green tomato; country ham with red-eye aioli, kale and apple butter; andouille and sausage gravy over biscuits; and an egg white frittata with a dash of hot sauce. Grits, tater tots, biscuits and pickled veggies are offered as side dishes.

Greensboro, North Carolina-based Biscuitville Fresh Southern recently added a Spicy Chicken and Honey Biscuit to menus at all 50-plus locations following a limited time offering that turned out to be the most successful in the company’s history. The spice comes from cayenne, white pepper and green and red bell peppers, and the chicken is drizzled with honey from a North Carolina supplier.

Why the South, and why now?
Southern cooks prized local ingredients well before the locavore movement took root, and chefs interpreting time-honored traditions continue to spotlight the freshest seafood, locally raised protein, and just-picked crops. To label a dish “Southern” is to apply a broad brush. The foods popularized in Louisiana reflect Cajun and Creole influences and the abundantly available seafood supply. Texas barbecue is far removed from Carolina-style. Low country recipes lean heavily on local vegetables and grains, coastal seafood and pork.

Grits, by the way, are trending alongside other Southern staples. Datassential reports that grits have grown 42 percent on menus over the last four years.* That even this pedestrian food is finding new fans is a testament to Southern cuisine’s appeal.

When Turkey and the Wolf debuted last year in New Orleans, it captured the whimsy of the South with specialties like fried bologna, potato chips, hot mustard and cheese piled on white bread, and a slow-cooked collard green melt on rye with pickled cherries and cheese. Soft-serve ice cream arrives topped with the likes of date molasses and Key lime pie chunks.

Chefs have lightened up Southern favorites
Lighter versions of typically heavy standards are winning over fans. Fried chicken and bulky biscuits remain crave-worthy, of course, but much of the Southern fare seen on menus these days exhibits a healthier profile. Greens, black-eyed peas, sweet potatoes and other sides are less likely to be thinly disguised vehicles for fat, salt, and meat gravies.

At Seasoned Vegan in New York, Brenda Beener tweaked her mother’s recipes by veganizing them, opting for herbs, pepper, onions and garlic instead of lard and meat, and swapping out seafood for burdock root. Los Angeles' My Two Cents serves a barbecue fried chicken Caesar salad and black-eyed pea hummus.

As Southern food evolves, it is likely to continue building a fan base across the U.S.