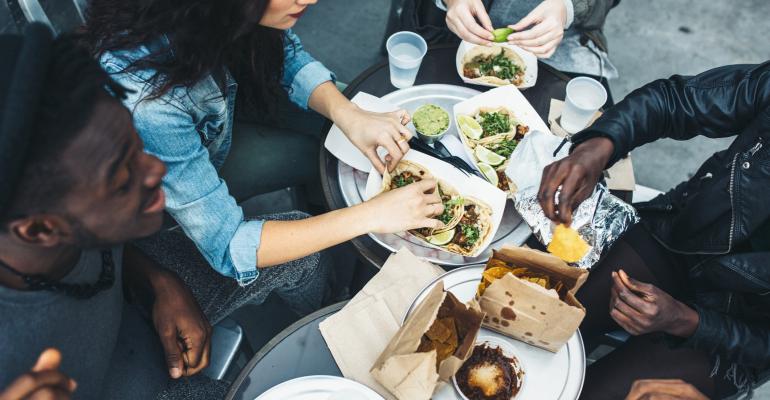 Since its birth in ancient Mexico, the humble taco has become an iconic American menu staple full of flavor.

Mexican street food dates back to the ancient Aztecs, but its arrival on the U.S. restaurant scene is barely a generation old. The taco, in particular,  remained on the streets and alleys of California’s Latino neighborhoods for decades before it was embraced by mainstream chefs and restaurateurs. What was once a bridge between an old way of life and the new has emerged as an iconic American restaurant staple.

Ironically, two legendary Los Angeles chefs — Susan Feniger and Mary Sue Milliken — first experienced the flavors of Mexican street food while eating staff meals prepared byLatin fellow  cooks at a French restaurant in Chicago. The two were so impressed by what they had eaten that they packed a VW bus and traveled all over Mexico learning recipes and techniques from market vendors, taco stands and home cooks. The result was the opening in 1990 of Border Grill in Santa Monica, California, where the duo devoted the entire menu to Mexican street food.

Authentic street tacos start with fresh corn tortillas which are filled with flavorful meat and topped with cilantro and a squeeze of lime. A dash or two or three of hot sauce is left to the discretion of the customer. Street tacos are small and designed to comfortably fit in the hand. They usually come three to a serving. Many American restaurants have adopted the street taco, but have expanded its size well beyond its original intent. The use of hard corn shells and large flour tortillas is also an American invention.

Back in Chicago where Feniger and Milliken got their start, another pair, Rick and Deann Bayless, created the landmark Mexican restaurant, Frontera Grill. The couple had been traveling throughout Mexico doing research for a book about street foods and home cooking there. The opening of Frontera Grill in 1987 was the result of their research. It, too, pays homage to Mexican street food and home cooking.

In 2007 Frontera Grill won a James Beard Foundation Award for “Outstanding Restaurant,” and two years later New York Magazine wrote that the growing food truck phenomenon had “largely transcended its roach coach classification and is now a respectable venue  from which  aspiring chefs  can  launch careers.” As discourteous as that comment may be to the authentic street foods served by immigrants around the country, it did signal the rise of the food truck and the elevation of street food in restaurants by classically trained chefs.

One of the landmark food trucks that emerged from the explosive trend was Kogi BBQ, which blended Mexican and Korean flavors for its tacos. Until this point, a short rib taco with kimchi was nonexistent in a public way. It was a sign post to chefs cooking Mexican street food everywhere that veering off the road of authenticity can be cool when it borrows from a chef’s own cultural identity.

What follows is a sampling of street tacos — some authentic, some not — that you’ll find around the country:

As you can see from these exciting variations of the street taco, even a humble staple can rise to become an icon embraced by food lovers everywhere.