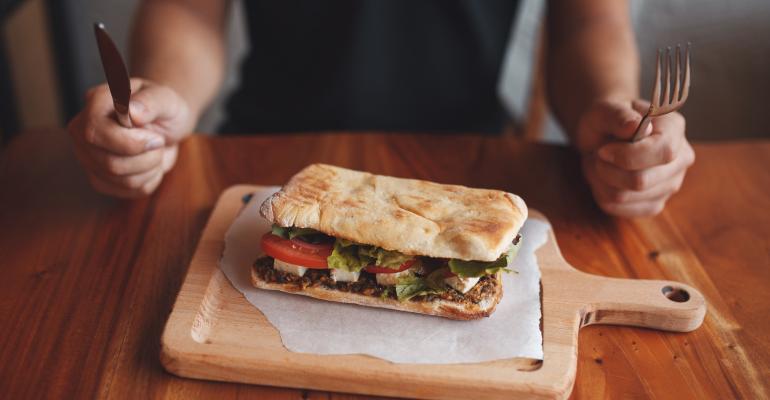 10 Ways to switch up your sandwiches

If you’re not getting creative with your sandwich offerings, perhaps it’s time to mix things up.

According to estimates, nearly half of Americans eat a sandwich every day. In fact, sandwiches appear on menus more often than any other main dish. If you offer sandwiches, and you likely do, the competition to drive customers to your place for a sandwich is fierce. So, what are you going to do about it? Experts highly recommend that you jazz up your selections by creating signature sandwiches with an interesting — and highly flavorful — twist. Here are some ideas to help drive customer interest and bring the flavor.

A ham and Swiss is certainly one of the most ubiquitous sandwiches in America, but consider this version offered by multi-unit Corner Bakery  Cafe.   Its ham and Swiss is served on tasty pretzel bread, which distinguishes it from the crowd and takes the offering to another level. Any sandwich can be elevated with the use of an unexpected bread style.

Though there are many bread options, you can use your imagination to think beyond the traditional. Consider, for example, the Monte Cristo sandwich at Social Kitchen and Bar in Las Vegas. Its breakfast sandwich skips traditional bread slices in favor of crisp mashed potatoes. At The Carving Board, a multi-unit sandwich shop in Los Angeles, you’ll find the Spaghetti & Meatballwich which offers meatballs served between crisped spaghetti that is formed into a bread-like shape.

You don’t have to change the ingredients in your sandwich or the bread around them. Instead, consider improving the quality of your ingredients. At multi-unit Panera Bread, a decision was made recently to improve the quality of the bacon in its sandwich. Panera bacon will no longer be cured with artificial additives or flavors, and it will be sourced with animal welfare in mind. Better-for-you sandwiches will draw a segment of the population looking to eat more healthfully.

At Slater’s 50/50, with multiple locations on the West Coast, burgers are distinctive because they are made with 50 percent ground bacon and 50 percent ground beef. That alone separates   its burgers from the crowd, but the concept is far more creative — and flavorful — than that. For example, its  Sriracha Burger is a flamethrower that features honey-sriracha bacon, Pepper Jack cheese, charred yellow onion, sriracha-sautéed mushrooms, sriracha coleslaw and sriracha mayo on brioche. It’s the kind of sandwich that gives customers something to talk about.

Like Slater’s 50/50, the folks at Blue Smoke in New York are not afraid to bring the heat. The restaurant's fried chicken sandwich is topped with a donut made with biscuit dough. The donut is glazed with honey and sprinkled with Aleppo pepper. A sunny side egg atop the chicken pops up through the hole when the sandwich is pressed down, which explains why the creation is called Bright Eyes Breakfast Sandwich.

Tap into a Feeling

For many, the best part of Thanksgiving is the sandwiches you make the next day from leftovers.  Multi-unit Capriotti’s Sandwich Shop capitalizes on this feeling through a sandwich called The Bobbie. This Thanksgiving-in-a-sandwich features pulled turkey topped with dressing, cranberry sauce and mayo. The best part-- it’s available year-round.

A smart way to bring additional interest to a traditional sandwich is through the introduction of another cultural influence. Consider, for example, the Italian-Cuban sandwich at Flying Fig in Cleveland. Chef-owner Karen Small starts with a traditional Cuban sandwich and replaces some ingredients with those traditionally found in Italian sandwiches. The roast pork is common to both, but then Small introduces mortadella (a high-end cured sausage), taleggio (a soft-ripened cheese), giardinera (pickled vegetables), kale and garlic aioli on focaccia. Is it really a Cuban sandwich? Not really, but it draws customers in and once they’ve eaten it, they’re sold.

At Root & Bone restaurant in New York, chef/owner Jeff McInnis says he’s a “country boy at heart,” and it shows on his menu. A standout is his Crispy Fried Chicken Biscuits, which feature TABASCO® Pepper Jelly, pickles and root chips. The biscuits say this sandwich-with-a-kick can be served in the morning, but the fried chicken suggests that it will work any time of the day. All restaurants should have a sandwich that is this versatile and tasty.

No Carbs, No Worry

Let’s face it — at least half the country is on a diet and many of those folks are avoiding carbs, which makes it hard for America’s sandwich makers. If that’s your worry, then take a note from other cultures the way P.F. Chang’s does with its chicken lettuce wraps. Minced chicken, mushrooms, green onions and water chestnuts are placed atop crispy rice sticks and it’s all nestled inside a lettuce cup. Portobello mushrooms, halved tomatoes, hollowed-out cucumbers and so much more can replace sandwich bread.

Big sandwiches are great if you’re willing to make the commitment. But what if customers want to taste around a menu? Why not convert a big sandwich into a slider? At The Cheesecake Factory, with its huge menu, customers can choose to include Southern Fried Chicken Sliders in their multi-item order. Instead of one big sandwich, patrons can have one of three small slider-size sandwiches. And the beauty is, if someone does have a big appetite and is not in the mood to share, three mini sandwiches will do.