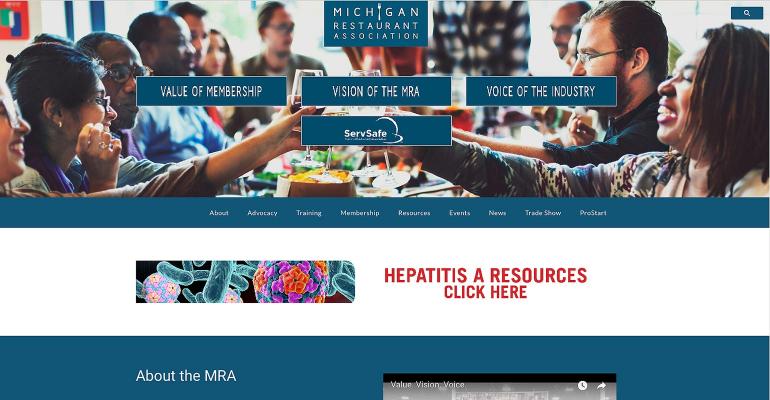 Hepatitis A outbreaks in several cities — including San Diego, Detroit and the Salt Lake City area – have prompted public health officials to look at foodservice operations in new ways and have drawn heightened responses from restaurant associations.

For instance, restaurant workers who handle food in Salt Lake County, Utah, can be ordered by health department officials to seek hepatitis A vaccinations if even just one employee of the establishment comes in contact with a person infected with the virus. The authority, which was granted by way of a temporary amendment to the county’s Health Rule No. 5, effective Feb. 1, had not yet been exercised by the health department as of late February.

The passage of the 120-day regulation, along with other strategies, such as pop-up vaccination clinics targeting restaurant workers staged by the Detroit Health Department in December and January, underscore the lengths to which health officials feel they need to involve foodservice as they try to stop hepatitis A from jumping into the mainstream population from the fringe environments of the homeless and drug users where it is often found.

“Throughout this outbreak, we’ve identified that some people infected with hepatitis A share a household or are otherwise in contact with someone who works at a foodservice establishment,” Gary Edwards, executive director of the Salt Lake County Health Department, said in a statement about the passage of the temporary amendment to his jurisdiction’s Health Rule No. 5. “When we’ve learned this, we’ve immediately acted to vaccinate all food workers in that same establishment for the protection of the public.”

Edwards told Nation’s Restaurant News that in the past, “almost everybody came forward and said, ‘Yes, we want that,’” when his agency spoke of vaccinations to the management and crew of restaurants where a worker has had contact with an infected person. Referring to the amended county regulation, he added, “But we wanted to have the ability to say, ‘You have to do this,’ in case there ever was that situation in which somebody said, ‘No, I don’t believe in immunizations.’”

The department will seek to make permanent the temporary rule change granting it authority to order vaccinations.

The National Restaurant Association said it was unaware of regulations similar to the Salt Lake County temporary rule in other jurisdictions.

Hepatitis A, which does not usually pose a long-term threat to healthy individuals, but can prove fatal to people with other health issues, such as liver disease, typically is transmitted person-to-person through the fecal-oral route or consumption of contaminated food or water, health officials said.

“Typically, in a 12-monh period, we see four,” Edwards said.

Since the outbreak began, employees of two foodservice operations in the county have been found to have worked while infected, he said, which in one case led to defensive inoculations for about 800 patrons who may have been exposed to the virus at that establishment.

Consumer food-safety attorney Bill Marler, who has sued restaurants in hepatitis A cases and long has advocated vaccinating restaurant and healthcare workers, said that in areas with outbreaks, it may make sense for the government to cover some or all of the costs for vaccinations.

Regardless of who pays, “When you have situations such as in San Diego, Salt Lake, Detroit and Louisville, you are leaning towards a clear and present danger and [operators] avoiding vaccinating their employees at that stage do so at a pretty significant risk,” Marler said.

Edwards said hepatitis A vaccinations cost $50, but the county has allocated some of its supply for use in situations where would-be recipients cannot pay or waived the cost when it would be in the best interest of the public, such as in the case of at-risk homeless people. While some of the free vaccines might go to a restaurant where a worker has had contact with an infected person, when the allotment of free vaccines is gone, “we would provide the vaccine to those individuals [restaurant workers] at half price [$25].” The county is not now discounting vaccinations for restaurant workers at establishments where there has been no verified contact between an employee and an infected person.

In Detroit, health officials have reported investigations at a casino and at least five restaurants since the end of October, including national chains, where an employee was determined to have worked while infected with hepatitis A. Detroit Health Department officials did not respond to requests for comment.

The Michigan Restaurant Association, working in concert with its chapters and while in touch with a statewide outbreak crisis management team, has increased the visibility of resources to fight hepatitis A, including education and prevention posters, and it has reminded restaurateurs of their legal responsibility to report infected employees to health departments. Amanda Smith, COO of the association, said hepatitis-specific content has been added to some other more general programs or presentations, including a legal matters symposium in early February.

“It included HR [human resources] law [and] we really dove into the concept of, if you think an employee has hepatitis you can – and should – ask them about it and take immediate action,” Smith said of the legal symposium.